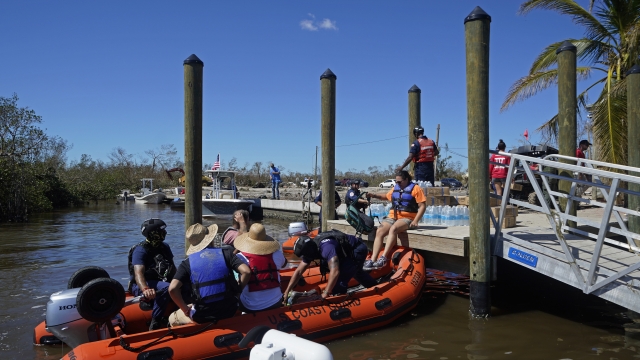 The images of Hurricane Ian's wrath are devastating. The scope of the damage may not be fully known for weeks. But for those who stayed behind, the hurricane dealt a major blow.

As many endure another day without power and water, with no timeline for when those utilities will return, it may be tough for people to stay for much longer. Helicopters fly overhead at all hours looking for any signs of life.

"Whether that was a flashlight or writing help in the sand or just being outside waving around, that's what we're looking for," said Savannah Brewer, a flight mechanic.

And rescue groups are traveling by boat or by foot, going door to door looking for anyone that may still be there.

The number of people killed by the storm grew sharply over the weekend as more search and rescue crews surveyed the hardest hit areas. Now questions are arising about just when and how people in Lee County were told to leave.

FEMA's director said the government is ready to provide aid days after Hurricane Ian came ashore as a Category 4 hurricane.

"Mother nature taught us a lesson. It's unpredictable. But I'm confident in the decisions that were made. I think the way you have to look at it is every loss of life you have to say yourself 'what could you do differently next time so it never happens again,'" said Florida Senator Rick Scott.

The Sunday before Ian hit, the National Hurricane Center was forecasting that the storm would hit north of Lee County, but they could still see storm surges of four to seven feet high if the storm stayed on its forecasted path. No evacuations were ordered at that time.

It wasn't until Tuesday, when Ian tracked even further south, that warnings of a "life threatening storm surge" were issued with the "highest risk from Fort Myers to the Tampa Bay region."

That same day, Lee County called for evacuations in the areas most susceptible to flooding and storm surges. It is a move that Lee County Sheriff Carmine Marceno says he wouldn't change.

"I am confident in our county manager, our leaders, our governor, all of us in law enforcement that we got that message out at the right time. Now whether people listen to it — we can't force people out of their homes," said Marceno.

Governor Ron DeSantis says he agrees with the decision that county officials made at the time.

"They were following the weather track. They had to make decisions based off that. It's easy to  second guess them but they were ready for the whole time and made that call when it was justifiable to do so," said DeSantis.