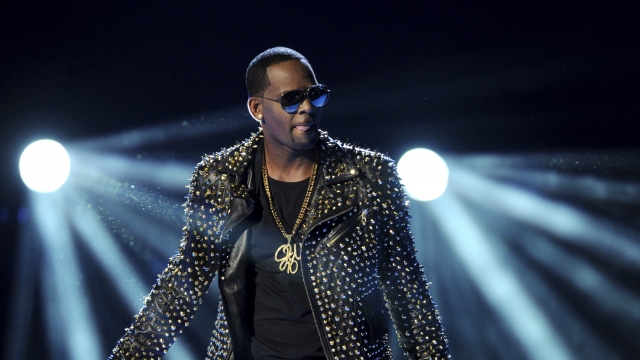 Jurors acquitted Kelly on all charges in that 2008 trial, some explaining later that they felt they had no choice because the girl did not testify.

Jury selection got underway Monday at R. Kelly's federal trial in his hometown of Chicago, where the R&B singer faces charges that he rigged his 2008 state child pornography trial by threatening and paying off a girl with whom he allegedly filmed himself having sex when he was around 30 and she was no older than 14.

Jurors acquitted Kelly on all charges in that 2008 trial, some explaining later that they felt they had no choice because the girl did not testify. The woman, now in her 30s and referred to in filings only as "Minor 1," will be the government's star witness in the federal trial.

Kelly, 55, was already sentenced by a New York federal judge to a 30-year prison term for a 2021 conviction on charges he used his fame to sexually abuse other young fans.

Kelly, wearing a light gray suit and a tie, sat next to his attorney Jennifer Bonjean as court began Monday. Bonjean introduced herself, Kelly and other attorneys representing him. Kelly wore a mask, as did everyone in court due to coronavirus precautions.

Before at least two dozen potential jurors were brought in, the judge said he hoped to select 12 jurors and six alternates Monday and Tuesday from a pool of 125. Once a jury is chosen, the panel will hear opening statements from prosecutors and the defense before the first witness is called.

Kelly, who rose from poverty on Chicago's South Side to become a star singer, songwriter and producer, faces multiple charges at the federal trial. They include four counts of enticement of minors for sex — one each for four other accusers. They, too, are slated to testify.

Before potential jurors were brought in, Bonjean asked the judge to exclude anyone who watched the documentary "Surviving R. Kelly" that revisited old allegations against Kelly and spotlighted new ones. An estimated 12.8 million people watched the six-part series that premiered in January 2019.

The judge denied that motion but said the jurors would be questioned about the program.

Two Kelly associates, Derrel McDavid and Milton Brown, are co-defendants at the Chicago trial. McDavid is accused of helping Kelly fix the 2008 trial, while Brown is charged with receiving child pornography. Like Kelly, they have also denied any wrongdoing.

Two state cases are also pending. One is a multiple count sex-abuse case out of Cook County Circuit Court in Chicago. The other is a solicitation case in Minnesota. No trial dates are set for either.

Minor 1 is expected to testify that she was on video having sex with Kelly. The recording was at the heart of the monthlong 2008 trial and was played for jurors almost every day.

Minor 1 first met Kelly in the late 1990s when she was in junior high school. She had tagged along to Kelly's Chicago recording studio with her aunt, a professional singer working with Kelly. Soon after, Minor 1 told her parents Kelly was going to become her godfather.

Prosecutors say Kelly later threatened and sought to pay off Minor 1 and her parents so they wouldn't testify at the 2008 trial. None of them did.

Double jeopardy rules bar the prosecution of someone for the same crimes they were acquitted of earlier. That doesn't apply to the Chicago federal trial because prosecutors are alleging different crimes related to Minor 1, including obstruction of justice.