Rams, STL Police At Odds Over Players' 'Hands Up' Pose 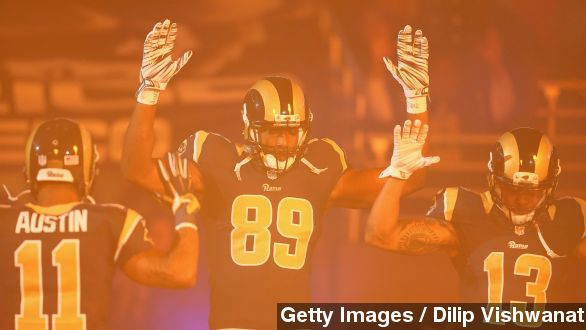 The St. Louis Rams VP reportedly denied issuing an apology to city police for players' 'hands up' pose despite earlier claims that he did.

St. Louis Rams' VP of football operations Kevin Demoff has reportedly denied issuing an apology to the city's police department Monday for the "hands up, don't shoot" pose made by several Rams' players the day before — despite earlier claims from a police chief that he did.

But, according to Demoff, the police chief misinterpreted the conversation.

"In none of these conversations did I apologize for our players' actions. I did say in each conversation that I regretted any offense their officers may have taken. We do believe it is possible to both support our players' First Amendment rights and support the efforts of local law enforcement."

It's worth nothing Demoff also said his conversations with various police officials throughout the day were "productive" and both sides kind of hashed things out and continued to strengthen their "positive relationship."

These talks sprouted from what is now a well-recognized event prior to last Sunday's game against the Oakland Raiders in St. Louis when five Rams players lifted their arms in the air in what they say was a show of solidarity for their community.

Then, Monday, Jeff Roorda, a manager for the St. Louis Police Officers Association, got caught in a bit of a media firestorm after releasing a scathing indictment of the gesture, demanding an apology and punishment for the players — something both the team and league have elected not to do.

"This was absolutely the wrong way to do it," said ESPN sports writer Jemele Hill.

"What Roorda doesn't understand is that what masses of people are finding offensive is the fact that Michael Brown is dead, and another unarmed black male teenager has an interaction with a police officer," The Nation sports writer Dave Zirin told MSNBC.

And, as CNN's Rachel Nichols explains, as contentious as the issue is, Roorda has had kind of a dubious record as a St. Louis police officer, so the media uproar doesn't come as a huge surprise.

"Jeff Roorda, if you want the background on him, used to be a police officer in the St. Louis area, was actually fired from that job for filing false reports, first against the suspect and then against his own police chief," said CNN's Rachel Nichols.

Aside from the backlash against Roorda's remarks, there's perhaps a bigger issue at stake here: where to draw the line — if even at all — with athletes who make peaceful political demonstrations without infringing on their first amendment rights.

In fact, several media outlets have already drawn comparisons of the Rams' apparent Ferguson salute to the 1968 Olympic games, when Olympic champions Dr. John Carlos and Tommie Smith held their fists in the air in support of human rights.