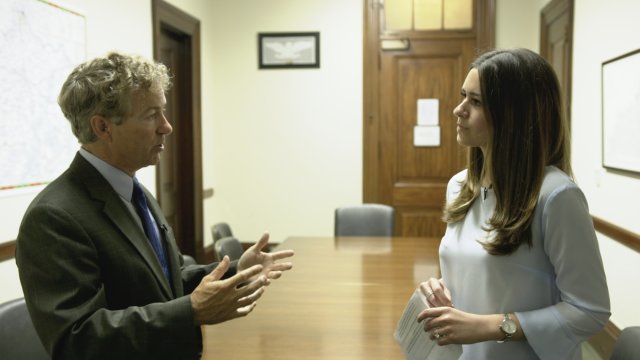 After 9/11, Congress passed the Authorization for Use of Military Force — otherwise known as the AUMF. It allows the president to use force against any group that he or she believes is responsible for or connected to the terror attacks. But 17 years after its inception, some lawmakers on Capitol Hill say the AUMF has been wrongfully interpreted and needs to change.

“The question is, should Congress have to act again in order to continue the war, and my point of view is yes, absolutely," said Sen. Rand Paul (R-KY). "I don't think we can keep fighting forever without Congress — the people’s representatives — voting."

Paul is one of several critics of the AUMF. He held a Senate hearing on Wednesday, where he cited endless war as one of the reasons he wants to see the current legislation go.

"We're currently at war in Mali and Niger," Paul said. "We have, like, a thousand troops there along the border in Mali and Niger and these sub-Saharan countries in Africa, and yet we've never had a debate. I got elected by the state of Kentucky — no one ever asked me, 'Should we be at war in Mali?' No one in my state knows anything about what's going on in Mali. I have only a superficial knowledge of who's fighting there and why they're fighting there, and we had four of our young men die chasing a herdsman, and it's like, really? Shouldn't we be at least debating why we're in Africa, why we're at war in Africa?"

He's not the only member of Congress who's offering an alternative, though. Republican Sen. Bob Corker and Democratic Sen. Tim Kaine proposed another version of the AUMF in April. In a statement, Kaine said it "strengthens congressional oversight and transparency and provides the executive with updated authorities to fight non-state terrorist groups abroad." But Sen. Paul believes their proposal is unconstitutional and could possibly allow for even more war.

"The problem with the Kaine-Corker legislation is it lets the president define who associated forces are," Paul said. "So it says, OK, you can attack Al-Qaeda, but it says the president can decide where Al-Qaeda is. So what if the president decides that the guard — the Revolutionary Guard in Iran — if he says, 'Oh, we think they're communicating with Al-Qaeda, they're now linked with Al-Qaeda,' which would be absurd, of course, but let's say he said that. The only way we could stop it is with a two-thirds vote, and he could actually attack Iran. One of the folks from the American Civil Liberties Union brought up another fact: It doesn't even say the president couldn't determine that associated forces weren't in the United States."

Paul added he's concerned about how costly U.S.-involved wars have already been and argued it's part of why we should bring some of our troops back home.

"I think the war in Afghanistan should end," Paul said. "I frankly think we should declare victory and come home. It won't be perfect, but the thing is we're spending $50 billion a year over there. We just don't have the money to be in, you know, 20 different countries fighting war."