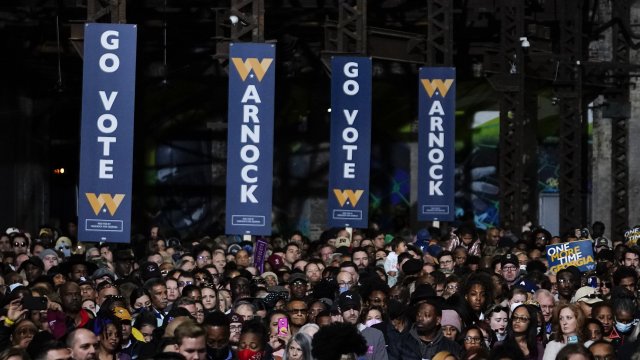 Two years after the runoff election that propelled Raphael Warnock to the U.S. Senate, the incumbent Democrat is trying to galvanize voters to turn back out to vote.

Friday marks the last day of early voting, with the Georgia secretary of state announcing over 1 million voters have already cast their votes in person, and reports of long lines at polling locations across the state.

That early vote is expected to benefit Democrats, with turnout higher in heavily Democratic counties.

The latest poll conducted after the 2022 midterms and released Thursday by Emerson College Polling shows Warnock polling 2 points ahead of Republican Herschel Walker, but still within the margin of error.

But the highest profile surrogate for Republicans — former president Donald Trump — has yet to make an appearance in Georgia for the runoff, despite his decision to kick off his comeback 2024 bid for the White House.

Kemp — fresh off his own reelection bid — earned 210,000 more votes than fellow Republican Walker, who was on the same ballot.

Now, with Walker alone on the ticket, Republicans need to rally behind him in big numbers to win this hotly contested runoff election.

While Dems have Senate control with at least 50 seats, grabbing another would mean it wouldn't have to rely on the Vice President as a tiebreaker.