Inside A Risky, Rare Brain Surgery For OCD 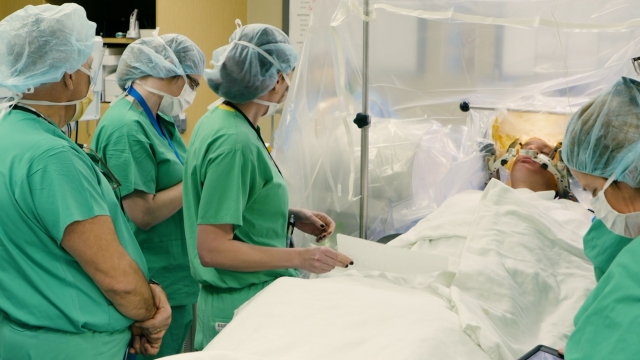 Implanting electrodes in the brain to treat a psychiatric condition is controversial. It's not a treatment that doctors or patients consider lightly.

"The craziest thing that I'll never forget was having my skull drilled into," Jon Blank recalled to Newsy.

Blank is among about 250 patients worldwide who have turned to deep brain stimulation to help treat severe obsessive compulsive disorder. Implanting electrodes in the brain to treat a psychiatric condition is new and controversial. It's not a treatment that doctors or patients consider lightly. But sometimes it's all that helps.

"When you're in that kind of situation, I just feel like I don't have that much to lose anymore," he said.

Blank had experienced years of triggers — fast food, anything east of Colorado and certain cars. Thinking about them or seeing them would lead to panic attacks or behaviors he couldn't control.

"It was very debilitating. I ended up in a mental hospital when I was 18. My knuckles were always red and bleeding from washing my hands so much. It was very difficult to hold down a job or even go to school. It really kept me just inside, scared of the world. I had all these rules in my mind that the OCD had come up with," he said.

Inside A Gym For Your Mind And Mental Health

A different type of gym is popping up that offers a variety of mindfulness options or ways to train your brain.

All of those had failed Blank. So in 2018, a neurosurgeon inserted two electrodes in his brain with wires under the skin connecting to batteries surgically implanted in a second procedure. In DBS, the electrodes stimulate brain circuits with the aim of bringing the illness under control. Think of a pacemaker, but for the brain.

But compared to treatment for movement disorders like Parkinson's, DBS for psychiatric conditions is almost brand new. The U.K.'s first clinical trial was published in 2019, and involved just six patients. For OCD treatment, it still has what's called a "humanitarian exemption" — the FDA allows it as treatment for extreme cases, even though there's no evidence of how well it works. And it's risky.

"There is a small but not trivial risk of a serious complication from surgery. We know that putting these electrodes in is safe for the vast majority of patients. But some, you can you run a risk of a stroke, of bleeding in the brain, of infection, of hardware-related complications. And so that's not to be taken lightly," Dr. Steven Ojemann, neurosurgeon at UCHealth University of Colorado Hospital, told Newsy.

Ojemann told us scientists also don't know exactly where the best spot in the brain is for treating OCD this way. And patients have to manage their expectations, because DBS isn't a cure-all for OCD. It doesn't stop symptoms with the touch of a button like it can for Parkinson's. Of the patients the University of Colorado has operated on, about half have reported more manageable OCD symptoms.

"It's not like you do DBS instead and then you can stop everything else," Davis said. "Usually people have to remain on the same medications, which are usually a lot of medications at high doses. And we recommend that people continue to engage in exposure and response prevention therapy."

But for patients like Blank, DBS can mean a new start. He sees Dr. Davis once every three months to check in and adjust his implant, but now his OCD doesn't define him. He's been able to snowboard in the Colorado mountains more often. He's also getting his master's degree and traveling.

"There's not all these rules my brain's making me follow, so I can do so much more now," Blank said. "[It's] just very freeing. I never had that freedom in my own mind. So, you know, being able to get out there and, you know, somewhat physically, freedom is really enjoyable. But now it's even better."