Ray Rice: 'I Take Full Responsibility For My Actions' 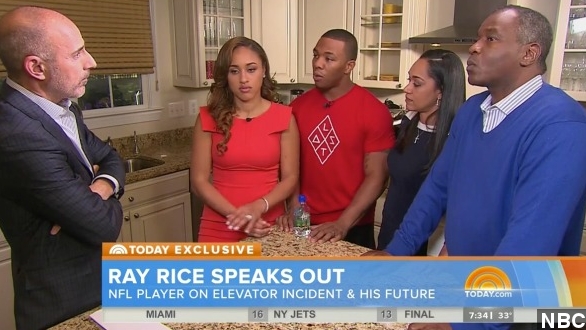 In his first TV interview since the elevator incident with his wife, NFL running back Ray Rice opened up to NBC's Matt Lauer about the fallout.

Monday, Janay Rice told her side of the story. Tuesday, it was her husband, Ray Rice, who was the center of attention.

"My wife is an angel. She can do no wrong. I take full responsibility for my actions," Ray Rice told NBC.

NBC aired Ray Rice's portion of its exclusive TV interview Tuesday where the couple spoke about what happened the night the NFL running back allegedly hit his wife.

Ray, who was standing with Janay and her parents, was asked by NBC's Matt Lauer about the night of the incident, the press conference months later and the fallout.

"If I never played football again ... I would adapt to the life and I would sacrifice more so she could have a better future. ... Only thing I can hope for and wish for is a second chance," Ray Rice said.

It's the couple's first TV interview since TMZ released this video purportedly showing Ray Rice striking Janay in the face.

The incident originally earned Rice a two-game suspension. Once the video went public, his punishment was bumped to an indefinite suspension by NFL Commissioner Roger Goodell and he was released by the Baltimore Ravens.

Just last week, though, Rice won an appeal and is now eligible to return to the NFL.

Still, Rice may have trouble finding a new team.

The couple says they've since undergone counseling and are in a strong relationship together. The full interview can be seen on NBC.