This Smartphone Is A Shrunken-Down Gaming Laptop 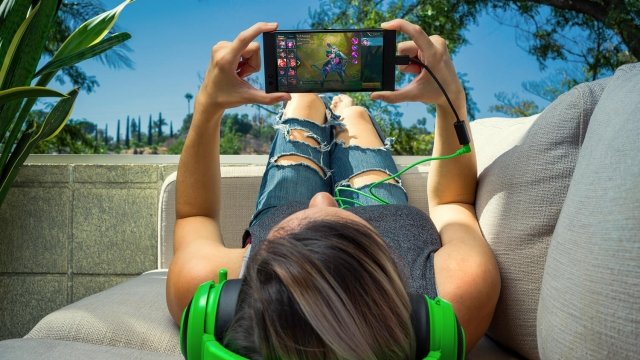 The tech industry has had its fair share of "gaming phones," and though they didn't play out well, this new phone might.

Razer, a tech company known for its gaming laptops and mice, teased its upcoming Razer Phone on Wednesday

The phone will feature a touch screen optimized for speed and two very loud front-facing speakers. Mashable says they may be the loudest speakers ever heard on a smartphone.

Engadget reports the company is also working with game developers to create custom themes or skins for the phone's interface.

Smartphones Are Getting More Expensive â But Are They Worth It?

Samsung's Galaxy Note 8 is one of the priciest smartphones on the market, and the iPhone 8 is rumored to cost even more.

Both phones fizzled out of the smartphone market — mainly because of hardware difficulties or poor game sales, which is what the phones were built for.

Considering the rise of mobile gaming, the Razer could evade the failed phones' fates and actually hold a place in both the smartphone and gaming industry. And it's not just because of "Angry Birds" or "Candy Crush."

Games like "Bastian" or "Hearthstone," which were originally released for computers, have gained popularity on mobile devices. Companies like Square Enix are even developing mobile adaptations of popular console games.