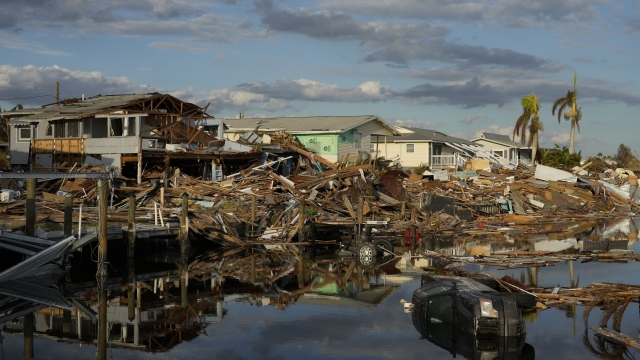 The 2022 hurricane season got off to a slow start, until Hurricane Ian pummeled Florida as one of the most powerful storms ever recorded in the U.S.

It was supposed to be a busy year for hurricanes. NOAA predicted up to 20 named storms in 2022, including five major hurricanes, but the year got off to a very slow start.

We did snap a seven-year record: It was the first time since 2015 that we haven't had a pre-season storm. Going all the way back to Ana in 2015, we've had at least one named storm before the start of the hurricane season, but that didn't happen this year.

Tropical Storm Alex barely got a name in June, and only after crossing over Florida, creating some flash flooding.

Tropical Storms Bonnie and Colin popped up in July, and then there was nothing for weeks. No storms formed in the entire month of August.

"I don't want anyone to not feel like they need to be prepared because 2022 will be a dud all the way through," WeatherTiger Chief Meteorologist Ryan Truchelut said in September. "I'm hoping it will be. It could be. But, I certainly wouldn't write off this season as of yet. The season's about 1/3 done in terms of overall historical activity."

Things changed quickly that month. Hurricanes Danielle, Earl and Fiona formed, along with Tropical Storms Gaston and Hermine. Although, none threatened the continental U.S. until Ian, which changed everything.

Volunteers From Across The U.S. Help Floridians Recover After Ian

Two weeks after Hurricane Ian made landfall in Florida, thousands of volunteers from all over the country are on the ground trying to help.

Ian began as a tropical depression in the Caribbean. It then pummeled Cuba as a Category 3 storm. It later moved over the waters of the Gulf of Mexico, which were 2 to 3 degrees warmer than usual in September. That gave the storm a big boost. The hurricane sucked up the heat energy. Its winds intensified to 155 miles per hour. As a Category 4 at landfall, it was one of the strongest storms to ever hit the U.S.

Ian devastated the Fort Myers area, causing up to $75 billion in damage and killing more than 100 people.

Most of those deaths were drownings; people died because they couldn't swim or they were caught in their houses or vehicles.

Are Hurricanes Getting Stronger?

Hurricane Ian cause billions of dollars in damage. Are recent hurricanes getting stronger?

The season — and destruction — wasn't over yet. Several more storms formed offshore and didn't hit the U.S. But that changed in early November as Nicole made landfall north of West Palm Beach, Florida. Its winds were not strong but its waves were fierce. The pounding waves washed away foundations, causing damage to dozens of homes and businesses near Daytona Beach.

"We lost a big chunk of the house and then the roof and the columns and the support beams and all the glass," said Ken Meister, owner of a half-collapsed home.

In the end, it was an average season: 14 named storms, eight hurricanes and two major storms. But for millions of Floridians, it was a devastating hurricane season.