2022 Year In Review: Health And Medicine 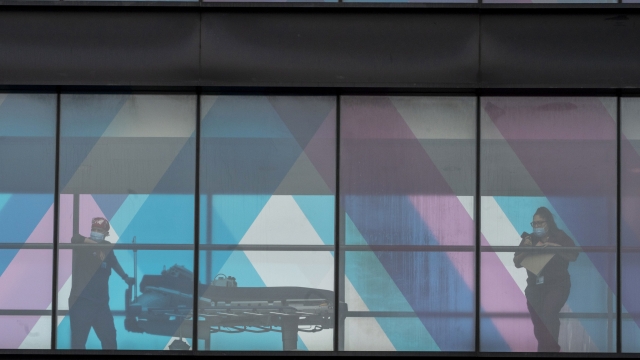 From mental wellness to a multitude of illnesses, the past year in health and medicine has been a roller-coaster ride.

Many of us have faced sickness in some way in 2022 — starting with COVID in January and the surge caused by winter indoor gatherings and the Omicron variant.

In May, the U.S. hit a grim milestone — 1 million COVID deaths.

We're ending the year on the worst flu season in a decade, and a so called "tripledemic" that includes RSV.

RSV has caused the highest number of child hospitalizations since the CDC began tracking it in 2018.

"This has been the hardest week, probably of my whole life," said mother Alyssa Rogers. "It is absolutely miserable to see him on the IV, and cords, and hooked up to oxygen."

I youngest suffered from a baby formula shortage caused by supply chain issues and a massive recall. In May and June, many parents faced empty shelves and panic.

"As a first-time mom only four months in, I never thought I'd be wondering if I could feed my child," said another mother, Alexis Graves.

The U.S. Is In The Midst Of A Mini Baby Boom

A new study analyzing the latest U.S. birthrate data shows an increase in newborns — a surprise to researchers.

It would be early August when the CDC declared the outbreak a public health emergency.

"We are down, I would say, several thousand hospital staff members in Virginia," said Julian Walker with Virginia Hospital and Healthcare Association. "There are openings at hospitals across the commonwealth."

Since then, doctors and patients have struggled with abortion care access, questions about medical emergency, and prescription medications connected to abortion.

"Some pharmacists and some states are refusing to stock or dispense methotrexate and other drugs," American Medical Association Dr. Jack Resneck said.

"To think about being in a scenario where we can't offer evidence-based care is horrifying," said Northwestern Medicine Medical Director of Fertility Preservation Kara Goldman.

U.S. Deaths Fell This Year, But Not To Pre-COVID Levels

From horrifying to hopeful, the year also showed us health innovation.

Hospitals rolled out transfusion treatments where otherwise unhealthy organs could be used.

In March, scientists finished mapping the entire human genome — a benchmark that can impact future health research and treatments.

And in October, hearing aids became available over the counter, making it less costly for those who need them.

As we round the corner to 2023, robots, AI and virtual or augmented reality will continue to shape tomorrow's medical care — care we'll chart along as it unfolds.