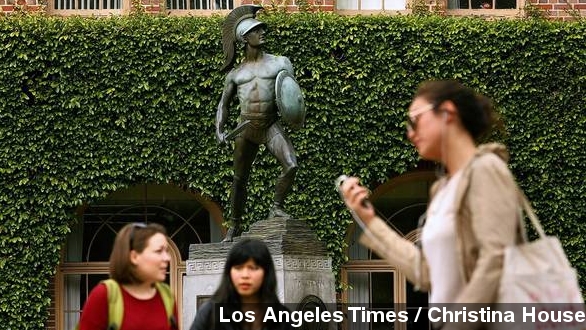 U.S. colleges and universities welcomed their largest number of international students ever last school year, and nearly half were from China.

U.S. colleges and universities welcomed more international students in the 2012-2013 school year than ever before. The chance to study in America looks as attractive as ever despite the high costs to get here.

"The Institute of International Education says about four percent of all college students in the U.S. are from abroad. In part, that's due to an influx of students from China, India and South Korea." ​(Via News 14 Carolina)

The IIE released its annual Open Doors study Monday with data on everything from where students come from, to where they study, to how much money schools make off international students.

U.S. News & World Report notes those nearly 820,000 students add $24 billion to the U.S. economy, in large part because the vast majority use family resources or support from their home countries to pay for tuition.

"At the same time, the number of American students studying abroad is also at an all-time high — but at a much lower level than international students in the United States." (Via  http://ynn.com/YNN-TV)

The IIE's President and CEO said in a news release that 90 percent of American students still don't study abroad.

Dr. Allan Goodman wrote, “We need to increase substantially the number of U.S. students who go abroad so that they too can gain the international experience which is so vital to career success and deepening mutual understanding.”

The top school hosting international students — The University of Southern California with more than 9,800.