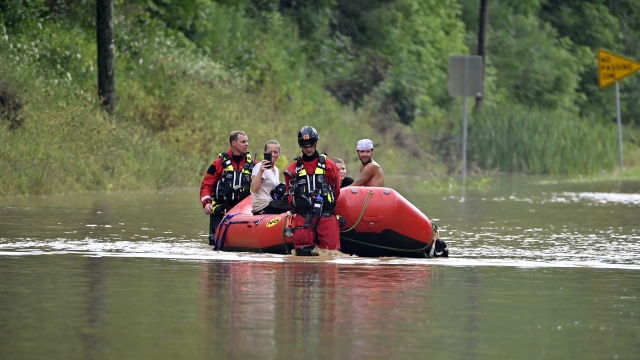 Some 1,400 people have been rescued, half by helicopter. But the ground search turns grim as crews find dozens of people confirmed dead.

Rescue crews are searching from the air, looking for any survivors from the cataclysmic floods that have devastated eastern Kentucky.

A family of five, including an 83-year-old woman, was lifted off the roof of their house as floodwaters surrounded it. Some 1,400 people have been rescued, half by helicopter.

On the ground, the search turns grim as crews find and retrieve bodies of dozens confirmed dead. The morgue is already overrun, so the state is bringing in a refrigerator truck.

"We know of more bodies that have already been discovered, so it is going to continue to grow," Kentucky Gov. Andy Beshear said.

The floodwaters decimated the infrastructure throughout the region, washing out dozens of bridges.

Some 10,000 people are without power and it could be off for days as the poles and transformers have been washed away.

Entire neighborhoods have disappeared, and some homes are floating away down the river.

"There's nothing left. Everything is destroyed. I don't know what we are going to do now," said Kentucky resident Nicole Neace.

President Biden approved a major disaster declaration, allowing federal funds to pour in to help with the recovery efforts. Residents are living in temporary shelters.

"I had no idea how fast and deep that creek would get. Just got to take one day at a time. Not sure what we're going to do," said Kentucky resident Karen Daugherty.

Emergency officials are pleading with residents to seek higher ground.

"We just got our most recent weather forecast and it's really tough," he said. "More rain is expected in eastern Kentucky."

The heavily saturated ground won't be able to absorb any water, and the rains could trigger mudslides.