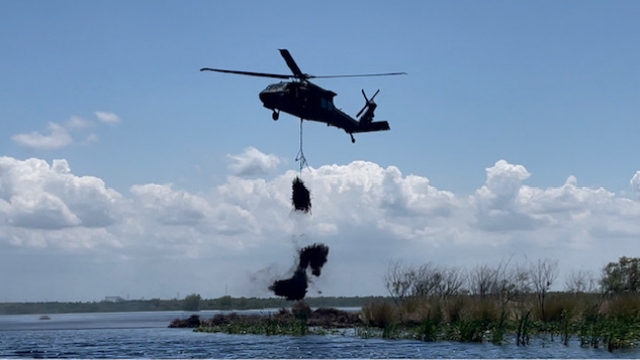 Black Hawk helicopters are dropping bundles of Christmas trees into the Bayou Sauvage National Wildlife Refuge in New Orleans – about 15 minutes from the heart of downtown.

"All of this was open water just like you see out in front of us," Pon Dixon of the U.S. Fish and Wildlife Service said. "So here we are about 20 years later and you see all the vegetation that has grown."

Dixon has been a U.S. Fish and Wildlife Service refuge manager for 16 years. He says this annual tree drop protects the city and its people.

Study Shows Which Parts Of U.S. Are At Risk For Natural Disasters

Natural disasters like wildfires and hurricanes can cause severe damage to lands.

"We built a series of fences out here to kind of like trap the sediments," Dixon continued. "It started to work so well that we decided, hey, let's try doing this with Christmas trees and stuff."

This year, 8,000 trees were collected and a little more than half were used for this project.

Marsh land and barrier islands are vital to protecting the city and its residents from violent storm surges. Though the marsh takes time to grow, Dixon says the project is working.

After seeing the success of the program, other areas in Louisiana are now looking to creating similar programs.