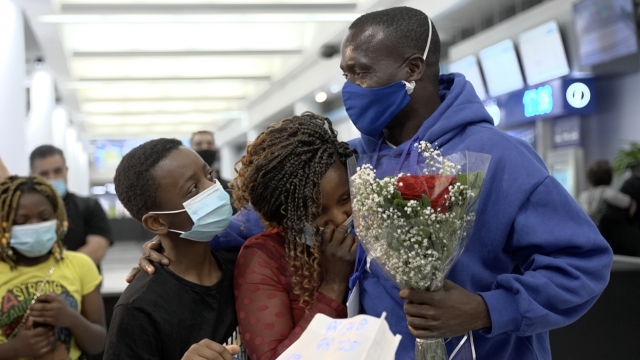 More refugees are starting to arrive at airports across the U.S. after President Biden recently raised the admission cap.

"God has done a miracle for me. Today we are together. I can say that I'm very happy."

For the first time in five years, Congolese refugee Mwenebatu Mwenemkamba is hugging his wife and son — the emotional reunion marking the start of their new life together in America.

"I mean. I just want to tell him I love him so much," said Mapenzi Mweniake moments after reunifying with her husband.

For more than 20 years, Mwenemkamba and Mapenzi Mweniake lived in a refugee camp in Tanzania after fleeing war and ethnic cleansing in the Congo. Their son Mussa was born there.

"In refugee camps, it's very hard. We are living like slaves sometimes who don't have food, medicine," recalled Mweniake.

In 2016, Mweniake and her son were approved for U.S. resettlement and came to Chicago. But as she found work at a facility that cares for people with disabilities, Mwenemkamba had to stay behind and wait for his clearance.

They never thought they'd be apart this long.

"I remember it was 2018, they told me your husband is coming soon. He'll be here like after three months. I was so excited. But after that I didn't hear anything, I was like 'what is going on?'" said Mweniake.

Historic cuts to the refugee program under the Trump administration and the pandemic slowed admissions down to a crawl.

But for the first time in years, arrivals are picking up again after President Biden raised the refugee cap for the rest of the year.

"In the next four weeks, we are going to welcome families from Congo, from Belarus, from Afghanistan, from Iraq," said Melineh Kano, executive director of RefugeeOne, the largest resettlement agency in Illinois.

Her organization, and many others, are helping refugees transition to their new life in the U.S.

"We are gradually ramping up our operations and our infrastructure to be able to have adequate staff and capacity to welcome the increased numbers of refugee arrivals," Kano said.

The U.S. has only welcomed around 2,500 refugees so far this year — the lowest number in decades.

In April, President Biden announced the refugee cap would not change this year, he later reversed the decision after weeks of backlash.

Newsy has learned that the Biden administration aims to reach 20,000 arrivals by the end of September.

Critics say the reversal is a bow to the left and a distraction from the border migration surge.

As for Mwenemkamba, Mweniake and their son, they are eager to make up for lost time and start their new life in a new Chicago apartment that a local church helped furnish.