Refugee Or Not? Countries Are Going High-tech To Figure It Out 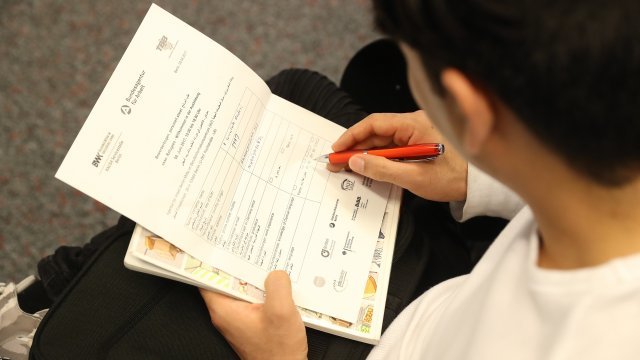 Germany has become especially good at it.

No matter the border, all refugees arrive with gripping, emotional stories about why they should be admitted. But not all of the stories are true.

Weeding out the real from the fake requires a Sherlock Holmes-style investigation — but high-tech in 2018. European countries have become adept at this, especially Germany. It learned out of necessity.

More than 2 million migrants flooded into Europe in 2015 and 2016, mainly because of the Syrian civil war. Many of them ended up in Germany, the continent's largest country with a strong economy. Deutschland accepted more asylum-seekers than any of its neighbors, to the relief some citizens and outrage of others.

When a person presents themselves, the screening starts right away with the obvious — questions, and then more questions, plus a discerning eye and ear for inconsistencies — things that just don't add up.

The questions can be basic. "What town did you live in?" Then drill into details: "What was your neighborhood called?" "Where did you go to school?" Finally, tugging on loose strings in the refugee's story: "What were you beaten with?" "Describe the prison where you were kept."

Beyond that is an entirely new family of technology, according to an article in The Atlantic. It's all aimed at migrants.

Facial-recognition software: Germany's Federal Office for Migration and Refugees uses a software and a database of thousands of photos that's been described as "godlike." The system has detected asylum-seekers who tried to apply more than once or maybe showed up in one country looking for entry, then told another story to another country.

Cellphone metadata: If an asylum-seeker has no passport, let's say, or they don't have identity papers, German officials can confiscate the person's phone and download metadata — not messages, just the data. If they claimed to have been in Turkey in September but the phone shows calls made from Yemen: red flag.

Language recognition: If a case officer suspects a refugee is lying about his native language to cover up his real country of origin, the officer calls a phone number on the office phone and asks the refugee to speak for two minutes straight into the phone. The refugee's voice is analyzed by a computer program that determines their native language.

Other nations are developing their own tests altogether. Sweden, a popular destination for unaccompanied minors seeking asylum, has had to turn to medical tests to verify age since word got out that young people had a better shot at being approved.

X-rays of wisdom teeth and MRI scans of knee joints are analyzed to determine a refugee's true age.

Listen to this: Between mid-March and late October, Sweden's Migration Agency performed 7,858 age assessments. The results suggested 6,628 were 18 or older (84 percent), and 112 "possibly" 18 or older. In other words, almost 86 percent might have lied about their age to boost their chances of being approved.

The goal, no matter the process or the place, is always to identify people who are legitimately running for their lives and weed out those who are running from crimes they committed somewhere else or simply looking for economic opportunity.