Fraud In The Addiction Rehab Industry Could Put Millions At Risk 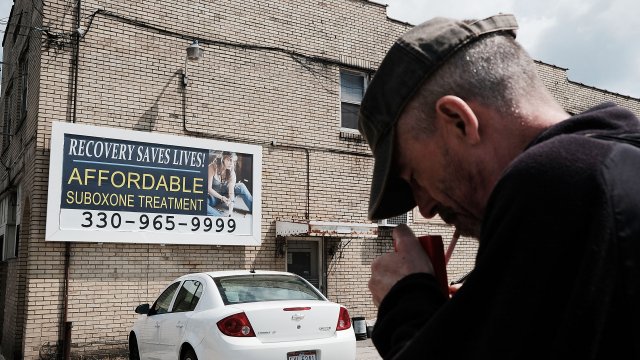 Without a check on unethical providers, millions of Americans suffering from addiction remain at risk.

An estimated 22 million Americans are currently suffering with addiction. But this country's drug problem isn't just about use. There's growing skepticism around rehabilitation.

"I was very hopeless. I had already overdosed nine times, and I was in a coma for a while where they said I was not going to make it and brain-dead," said Andrew Johnson, 29.

Johnson's heroin addiction started when he was 16. Now, he's been sober for three years. But his journey to sobriety includes almost two dozen stops at treatment centers near and far from home in Massachusetts — many of which he says had no interest in helping him recover.

"I think a lot of places need to be shut down. They need to be regulated," Johnson said.

Johnson's story is increasingly common. Newsy spoke with a dozen people in recovery and their relatives, as well as addiction experts who warn of an increasing distrust of the industry.

The rise in addiction and lack of regulation in the treatment industry has created a perfect storm of fraud and abuse.

The number of treatment facilities has been increasing since the opioid crisis began decades ago, helping many Americans get sober. But a Newsy analysis shows some clinics have done more harm than good. Since 2012, more than 21 programs across six states have shut down for issues related to either fraud or abuse. The majority of those shutterings happened in the past four years.

"There's no incentive for people to make these folks sober. Their money is not in sobriety," said Dan Kreitman, program director of the Healthcare Fraud Prevention Partnership.

Scams have engulfed the rehab industry, from luring vulnerable patients to insurance fraud and deceptive marketing practices. Behavioral health experts warn that these fraudulent programs can cause permanent damage to a person's chances at recovering — posing a serious problem to the millions of Americans that are currently battling addiction.

"There's a window of opportunity when people are ready for treatment. And if it's bad or it's abusive, it can be really, really damaging to somebody in that moment and also as they view their opportunities or chances in recovery for the future," said Tom Hill, vice president of practice improvement at the National Council for Behavioral Health.

With no regulatory body keeping tabs on the industry, it remains difficult for people to distinguish between the good and bad providers — and gives the latter the opportunity to keep taking advantage of patients desperate for help.

"You have less recourse in terms of accountability and responsibility. If you have a bad experience — a malpractice experience — in a hospital, you have some vehicle to file a complaint, to file a lawsuit. That's really, really difficult in much [of] addiction treatment, especially if they're bad players who are flying under the radar," Hill said.

The White House updated a government website in October 2019 to make it easier for people to find help for addiction, and most presidential candidates running in 2020 have plans to address the opioid crisis. But to date, there’s been little federal effort to rein in the industry.

"We're not solving the problem. The problem of addiction and the problem of the overdose issue and the opiate crisis in general is not coming down. It's getting worse," Kreitman said.

While Johnson had several bad experiences, he acknowledges that there are ethical treatment centers out there doing the right thing. But he warns that without a change to the system, millions of Americans will remain at risk.

"As everybody in the United States probably knows now, you don't last that long as an opiate addict," Johnson said. "You end up dead or clean. Those are the two end results."