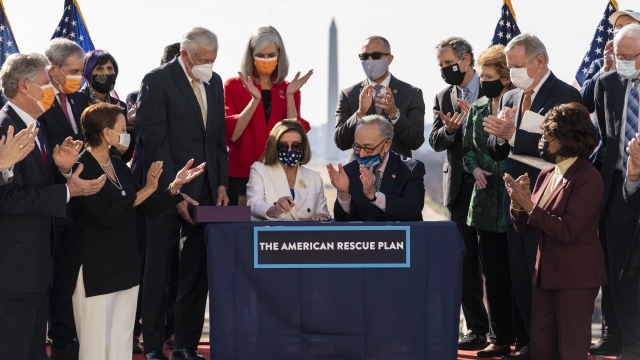 One analysis found the poorest 20% of Americans will see 20% higher incomes this year under provisions of the American Rescue Plan.

Inside the COVID relief package passed by Congress: multiple measures aimed at providing targeted help for some of the lowest-earning Americans.

According to the Tax Policy Center, the poorest one-fifth of Americans will see 20% higher incomes this year, thanks to $1,400 stimulus checks and an expanded child tax credit.

That child tax credit was raised from the customary $2,000 per year per child to $3,000 per year for children aged 6-17, and $3,600 for children under 6. Plus, the credit will pay out on a monthly basis, meaning most American families with children may actually see monthly payments between $250 and $300. Advocates say those payments could cut the number of children living in poverty by nearly half.

Also tucked into the bill: $39 billion in relief distributed to states to help struggling child care centers and money to fund the pensions for reportedly more than a million unionized retirees whose pensions are near collapse.

It even contains the largest targeted funding ever for Indigenous people -- $31 billion -- and up to $5 billion for farmers of color, which some are dubbing a first batch of “reparations.”

"This legislation is one of the most transformative and historic bills any of us will ever have the opportunity to support,” House Speaker Nancy Pelosi said Wednesday, moments before the bill was passed.

But for Republicans, the nearly $2 trillion bill was simply too expensive and too late, with some saying $1.9 trillion might have only been appropriate a year ago.

The bill passed both houses without the vote of a single congressional Republican.