Chinese Railroad Workers Who Helped Build The US Were Almost Forgotten 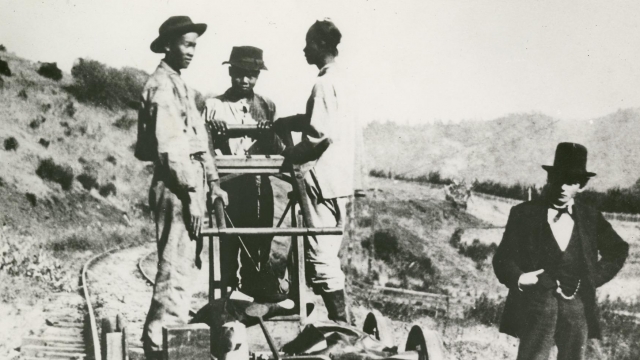 This clang would have been familiar to Chinese railroad workers as they worked on the Transcontinental Railroad for 11 or 12 hours a day, six days a week. 150 years ago, this railroad was the first to connect America's East and West coasts. A journey that previously took four months could now be completed in four days. This fueled our country's rapid economic growth, making it the world superpower it is today. None of this would have been possible without the 10,000 to 12,000 Chinese railroad workers who made up 90% of the West's workforce. But you wouldn't know it by looking at this iconic photo taken at its completion in 1869.

Riley Ren, collections assistant at the Chinese American Museum, says: "When people think about the Transcontinental [Railroad], that's the photo they think about. That's the narrative. The mainstream tried to push that photo of people who are considered to be instrumental in the construction of the railroad. ... The railroad executives, the railroad [workers] of European descent. But you don't see any Chinese workers."

At the Chinese American Museum's new railroad exhibit, another photo taken in 2014 hints at the true story of the past that's been erased. Descendants of the Chinese railroad workers are prominently featured at the center of the photograph.

Ren says this is a way to reclaim the work and narrative.

"Sometimes Asian-Americans are considered as the perpetual 'other'. In fact, they are the ones who built this country and linked the coasts together."

And it’s not just one photo that erased Chinese workers' contributions to the railroad. They're missing from history textbooks and newspaper articles, too.

Gordon Chang co-directed a project about the Chinese railroad workers at Stanford, which contributed to this museum exhibit. He said: "The erasure of the story of Chinese railroad workers from American history textbooks is similar to the neglect or erasure of much of minority history in American life. ... There are many other works, both published books, as well as magazine articles that mentioned Chinese hardly at all or neglect them entirely. "

How One Photographer Captured Asians In American History

For 45 years, Corky Lee has taken pictures of Asian-Americans to showcase their contributions to U.S. history.

So why leave out the Chinese workers from the railroad story for all these years? A lot of it had to do with white workers' fears that the Chinese were taking their jobs — and working at a cheaper rate.

Ren: "At the beginning, they were paid $26 a month, as opposed to European-American workers who would make $40 a month."

Despite the huge role Chinese workers played in completing the railroad, the U.S. passed a racist law to ban them from the country just 13 years later. The Chinese Exclusion Act was the first law that banned immigration based on race and also deported Chinese workers who were already in the country. The law stoked anti-Chinese sentiment, leading to violence against the community.

Chang: "So the anti-Chinese sentiment that arose in the 1870s and 1880s resulted in also their erasure from the written history of the country."

Ren: "When people at that time talk about railroad workers, they also talked about how efficient they are, how good a worker. It's almost like a product review, as opposed to how great a people they are. So this is a way for us to humanize as them."

This Asian American and Pacific American Heritage Month, we honor everyday men and women who use their identity to inspire others.