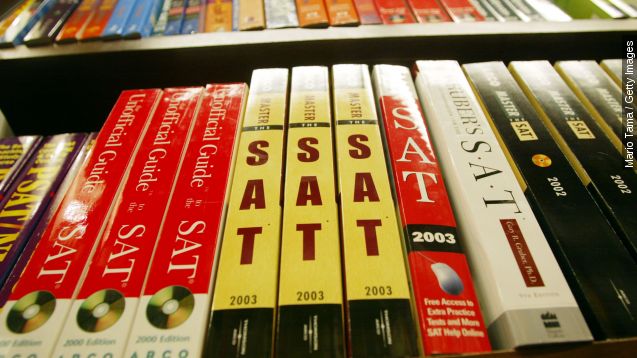 The latest batch of SAT scores continue to slide lower, but a 2016 revamp to the test could help revitalize the test's reputation.

Recently released test scores for the SAT are the lowest they've been in decades.

But the College Board, the organization that produces the test, is emphasizing an increase in overall test takers and the diversity of those test takers. (Video via College Board)

The College Board's vision of college and career readiness doesn't seem to be reflected in this year's results.

Based on the College Board's measure of college and career readiness, less than half of all test takers made the mark. (Video via Scantron Corporation)

When the results were broken down by ethnicity, the only groups with more than a 50 percent college readiness mark were White and Asian students.

The 2016 SAT redesign is meant to address some of the SAT's achievement gap problems illustrated in this batch of SAT results.

To the College Board's credit, there has been an increase in minority students taking the test and students using fee waivers to take the test.

But the increased diversity of test takers won't necessarily help the SAT's reputation for being more elitist than its competitor ACT, since drastic gaps in student achievement are still apparent in the most recent results. (Video via College Board)

More test takers could be a factor in the decrease in scores overall. On the state level, a lower number of test takers has frequently gone hand and hand with higher average scores, partly because of self-selecting students already on track to apply to highly selective colleges taking the exam.

The redesigned SAT could look more like the ACT in its current format. For example, the 2016 SAT will get rid of the guessing penalty and the essay section will be optional — both features the redesign shares with the current ACT.

With those changes, the new SAT could help the College Board recover from criticism about how the exam itself affects low-income students and students of color. (Video via College Board)