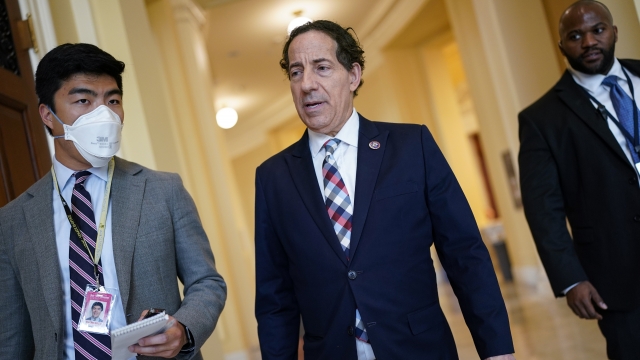 Maryland Rep. Raskin shares why he believes the hearings are bipartisan and what the committee hopes to accomplish once the investigation is complete.

Newsy Congressional Correspondent Nathaniel Reed spoke with Rep. Jamie Raskin, who is a Democrat from Maryland serving on the Jan. 6 House Committee.

NEWSY'S NATHANIEL REED: Rep. Raskin talk to me a little bit about the importance of having so many Republican members of the former president's administration present and giving testimony in these hearings, both live and recorded.

REP. JAMIE RASKIN: Well, some of our colleagues who have tried to boycott the hearings have claimed it's a partisan exercise, and if it's partisan, it's purely Republican. I mean, the overwhelming number of witnesses have been people who are in the Trump administration or they are Republican elected officials or Republican activists, and they are the ones who have discussed the betrayal by Donald Trump of the Constitution, of their party and of the country. So, you know, one of my frustrations as the leader of the impeachment drive in the Senate when we went over to the Senate for the trial, was that everybody in our team was a Democrat. And so, it was easy enough for some people to say, 'Oh, it's a partisan exercise,' even though we did get 10 Republican — seven Republican senators, rather — to join all 50 Democratic senators and voting for conviction. But it's very clear that our committee is a bipartisan committee with meaningful involvement of people across the spectrum, from all over the country, and the witnesses overwhelmingly come from the Republican camp. So, Donald Trump cannot claim this is some kind of, you know, "witch hunt" by Democrats and the liberal media.

REED: To that point, for people watching at home, is this the third impeachment, effectively? I mean, they had two impeachments in the House. The second one, which you participated in, included a lot of video evidence, but do you think you've been successful in differentiating this for the average viewer at home?

RASKIN: So the second impeachment was about one guy, Donald Trump, and one crime, a constitutional crime of incitement to insurrection. He was impeached for that in the House, 57-to-43 vote in the Senate to convict him of that. It didn't get the two thirds benchmark under the constitution, so he beat the constitutional spread. And so, we're left in this kind of weird limbo status because commanding bipartisan majorities in both the House and the Senate said he's guilty of inciting insurrection. But the point of this select committee was to analyze everything, all of the crimes. What happened on January 6? What were the causes behind it? And what do we need to do to fortify our institutions against coups and insurrections and political violence and attempts to overthrow elections in the future. So, we told a much more comprehensive story. We were able to interview more than 1,000 witnesses. Of course, we had impeached the president three weeks after the violent assault on the Capitol and we had basically no witnesses. We had one witness through a statement that was taken, but other than that we didn't have the witnesses. And so, I think what's happened here is that the actual attack on our democracy has come alive for people. It's totally vivid. People can see it in all its three-dimensional humanity. Donald Trump was the ringleader of this effort to overthrow the election. He tried to shake down Republican election officials like Secretary of State Brad Raffensperger in Georgia, like, the speaker of the Arizona House Rusty Bowers. He tried to coerce his own vice president into stepping outside of his Constitutional role and just abolishing electoral college votes from Arizona, Georgia, Pennsylvania and other states. This happened to Republicans, so it's not a partisan thing. But the real difference here is that we're able to tell the story of the human beings who were involved in Donald Trump's attempt to overthrow the results of the 2020 election.

REED: This was a very curated set of hearings here. Do you think that you were successful, as a committee, in getting your message across?

RASKIN: Yes, absolutely. I mean, we understand there are tens of millions of people who have been watching every single hearing that we've done. We know that it's moved public opinion, obviously, among Democrats who were already convinced of Trump's culpability and the danger of the situation. But now overwhelmingly among Independents, and then among an increasingly large number of Republicans too, who say, "Hey, this is not what we signed up for." So, I think ultimately, it's just going to be the dangerous extremists in the end, like the Proud Boys and Oath Keepers, the Three Percenters, the Aryan Nations, the militia groups that were with Donald Trump who end up standing by him. And I think — I certainly hope — the rest of the country will desert him.

REED: About halfway between us here at the Capitol and the White House is the Department of Justice. Is part of these hearings for them? For them to take action? For them to pursue a case against either the former president or his allies?

RASKIN: Well, the interesting thing is the DOJ has a lot more resources than we do to collect evidence and that, of course, is the major business they're involved in. So, I don't think we really gave them a lot that they didn't already have, or at least they didn't have the capacity to get. Our audience has been much more of the American people and Congress itself, because in a democracy, the people have the right to understand what's going on with our own institutions, with our own political leaders. And so, I think it's been an education for the country. If there's information that helps the Department of Justice, great. But they're perfectly able to go and get their own evidence, and they brought more than 850 cases already.

REED: Has the committee ruled out having former President Trump testify or provide testimony or a deposition?

RASKIN: Look, the investigation is still open and so, we haven't made any final decisions about any investigative leads in lines of inquiry.

REED: You were a constitutional law professor at American University Washington College of Law for over two decades. Do you think changes to the Electoral Count Act of 1887, which some could say led to some of the disagreements on January 6 — some of the rejecting of certain electors or attempts to reject certain electors — Do you think changes need to be made to that act?

RASKIN: I think that there's some changes that are appropriate. You know, to lay my policy cards on the table, the very first bill I introduced as a state senator in Maryland was to move to a national popular vote, which most Americans think we've already got and more than 75% of Americans think we need — we should elect the president the way we elect governors, members of the house, U.S. Senators, representatives, everybody else, which is whoever gets the most votes wins. That's simple. The Electoral College is an antiquated and, I think, obsolescent institution that didn't create the problems, but it set the stage for a bad faith actor like Donald Trump to exploit every nook and cranny in the Electoral College system to plant with booby traps and complex. I mean January 6 used to be a day — My colleague in the Rules Committee, Ed Purlmutter (sits next to me) told me of bipartisan unity, where people would come in and they would count the votes. It would take five or 10 minutes and everybody would go out and celebrate on a bipartisan basis. Today, you can get killed on January 6.

REED: Fair to say that the Electoral College isn't going away anytime soon. What can we expect from the committee When you come back in September?

RASKIN: The committee will complete hearings on the investigation and if we feel that there are lingering pieces that we need to make public. And then, also, there will be a hearing about all of the recommendations that we feel strongly about that America needs in order to build our strength against these kinds of attacks in the future.

REED: Representative Raskin: Democrat from Maryland, constitutional law professor, impeachment manager and member of the January 6 Committee — Thank you for your time.

RASKIN: Thank you for having me.