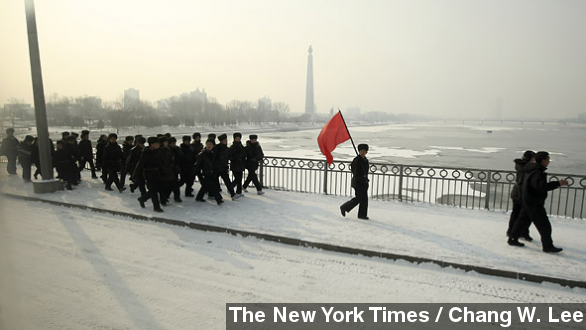 A Japanese newspaper reports Kim Jong Un may have been under the influence when he ordered the execution of two of his uncle's aides.

North Korean leader Kim Jong Un may have been under the influence when he ordered the execution of government officials last month. But so far, you could call it a third-hand report.

The Independent picked up the headline, but cited a Japanese newspaper that reported the young dictator was very drunk at the time.

And that Japanese newspaper cited unnamed sources. (Via Yomiuri Shimbun)

And the report was picked up and repeated from there. (Via Fox News)

Of course, it's nearly impossible to confirm this as the famously-reclusive nation rarely grants foreign journalists access. But the story behind the uncle's execution is becoming a bit little more clear.

Earlier this month, North Korea confirmed the execution of Jang Song-thaek, labeling him despicable human scum worse than a dog. (Via BBC)

Two top aides had reportedly questioned a decision of Kim’s, saying they needed to first check with “Director Jang" — his uncle. That apaprently didn’t go over too well with the Supreme Leader. (Via ITN)

He was accused of standing in the way of Kim's succession, being "affected by the capitalist lifestyle" and "dreaming different dreams" than the regime. (Via NPR)

Some analysts suggested Kim was trying to consolidate power when he ordered his uncle be killed. Others thought Jang's perceived close ties with China may have been to blame. (Via PBS)

But as CNN notes, officials with South Korea's National Intelligence Service now say there may have been infighting over some potential business dealings, which The New York Times reports involved “highly profitable clam and crab fishing grounds” and questions over who would profit from them.

South Korean news outlet the Daily NK reports in the days following his death, Jang’s family and friends were arrested and sent to political prison camps — as is often the case with the country's guilt-by-association system.

Eight other people were reportedly executed in what was seen as the biggest political upheaval since Kim took over from his father two years ago.