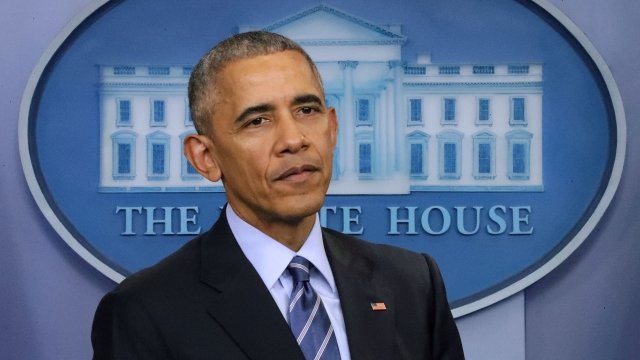 Politico conducted a monthslong investigation into the accusations.

As the Obama administration worked to secure the Iran nuclear deal, it also put roadblocks in front of a U.S. campaign investigating drug trafficking by Hezbollah, an Iranian-backed terrorist group. That's according to a brand new Politico investigation.

The Drug Enforcement Administration's campaign, called Project Cassandra, began in 2008. The DEA had been gathering evidence that Hezbollah had expanded into an international crime organization that Politico says "some investigators believed was collecting $1 billion a year from drug and weapons trafficking, money laundering and other criminal activities." Some of that cocaine made its way into the United States.

"It started looking at efforts by Hezbollah to link up with Colombia drug cartels, West African money launderers and others. The more they focused on it, the more they reached up into the hierarchy into the organization they believed and they said the more they did that the more they got pushback from the Obama administration," Josh Meyer, senior investigative reporter at Politico, told Newsy.

Sources claim the Obama administration impeded and undermined specific investigations and prosecutions. That included delays and rejections of prosecution and sanction requests from the Justice and Treasury departments so Iran would stay at the negotiating table.

"There was no secret memo that said, 'Do not let them do anything — prosecutions or investigations.' In some cases, they would just keep demanding more evidence, just say, 'We're not going to do this,' reject cases," Meyer said.

Politico spoke with former Obama officials. They deny "they derailed any actions against Hezbollah or its Iranian allies for political reasons," but did say law enforcement investigations have to be weighed in terms of a broader American foreign policy.

"Nobody had malicious intentions here. I think everybody was trying to do what they thought was the right thing," Meyer said.

The principals involved in the investigations told Politico one of the biggest issues for them was they don't believe the two issues, getting an Iran deal and prosecuting these Hezbollah drug traffickers, were mutually exclusive.

"That you should be able to use that actually as leverage to keep them at the table and say, 'We know about these activities, we'll crack down on them if we need to,'" Meyer said.