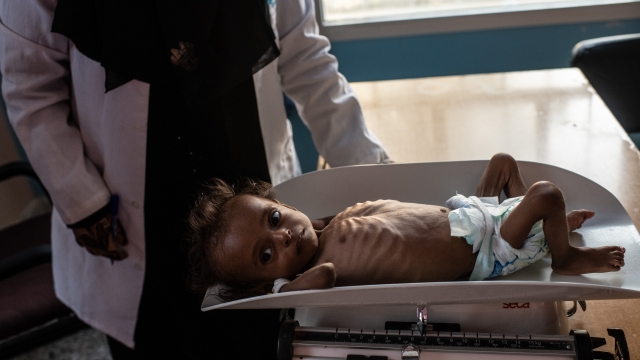 The Washington Post reports that demands by Iranian-backed rebels to tax humanitarian aid may force major aid cuts from the State Department.

The Trump administration may suspend humanitarian aid to the war-ravaged country of Yemen. The Washington Post reports the State Department is considering the move because Iranian-backed rebels want to tax aid shipments in vast areas of the country.

Yemen's civil war has claimed more than 100,000 lives and triggered one the world's worst humanitarian crises. It accelerated in 2015 when Houthi rebels loyal to Iran took over the capital city of Sanaa. That brought a military response, including airstrikes and a ground campaign by Saudi Arabia, which is backing the Yemeni government.

The United Nations, which has led an international aid effort, says the civil war has left 14 million people in acute need with shortages of food and clean water. The war has led to outbreaks of cholera and dengue fever, a debilitating disease transmitted by mosquitoes. Move than 130,000 people have died from sickness and famine.

Last year, the U.S. sent $746 million in aid to Yemen as part of the international relief effort. But a State Department official, interviewed by The Post, said Houthi forces are demanding a 2 percent tax on aid shipments in rebel-held territories. The Trump administration is worried that will fund rebel troops and that critical food supplies will be siphoned off and sold.

The official told the newspaper the U.S. may have to cut off much of that aid due to "unprecedented Houthi obstructionism," adding: "It's an unfortunate situation and we're trying to work the problem."

Saudi Arabia, an enemy to the Houthis, isn't considering suspending humanitarian assistance so far. The head of the Saudi aid organization, KSRelief, said doing so won't hurt the rebels. He told The Post: "If we stop (providing aid), we are penalizing the people of Yemen."