Reports: Lady Gaga to Perform in Space in 2015 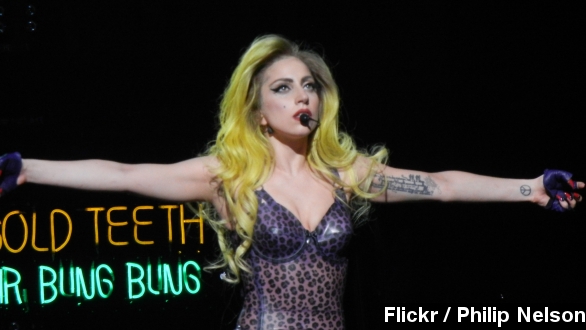 Lady Gaga will reportedly sing a song in space during a three-day music and tech festival.

Well, it was only a matter of time, really. Lady Gaga is reportedly scheduled to perform in space.

The Mother Monster is set to blast off in a Virgin Galactic ship and sing one song during the Zero G Colony festival, a three-day music and tech event in New Mexico scheduled for early 2015. (Via YouTube / o2ukofficial)

A source tells Us Weekly Gaga will be doing a month's worth of vocal training to prepare her for the different atmosphere and promises the performance with be "like nothing the world has ever seen before."

The 27-year-old and her entourage are reportedly going to launch at dawn on the festival's third day. She'll perform one song before returning to Earth. (Via Music Times)

If true, she'd be the first singer to perform in space.

But she's not the only entertainer shooting for the stars.

Celebrated opera soprano Sarah Brightman has already confirmed her plans to sing at the International Space Station — but for science, not for a performance. (Via The Telegraph)

She has a seat saved for her on the next Russian flight to the station, which won't be until 2015. But with her physical and vocal training already completed, she's also purchased a Virgin Galactic commercial space flight ticket. (Via YouTube / Sarah Brightman)

The first of which is scheduled to take flight six months before the Gaga performance. Six hundred fifty people have purchased tickets for that flight at more than $200,000 apiece. (Via NBC)

Other singers who've signed up for the Virgin Galactic flight: Katy Perry, Lance Bass and Justin Bieber. Ground Control to Major Tom: It looks like we've got ourselves a singer space race!