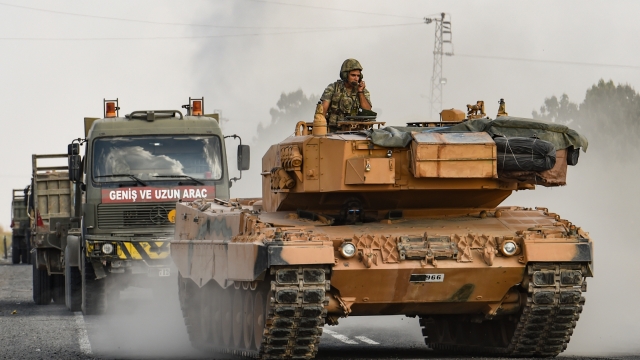 Turkey says it's honoring the cease-fire but will continue to confront Syrian Kurds in the territory it believes to be its own.

Syria's state-run news agency reported Thursday that its troops in the northeast had been attacked by Turkey and its allies. The report followed accusations that Turkey had resumed attacks in the area despite a cease-fire.

The Kurdish-led Syrian Democratic Forces, or SDF, tweeted Thursday morning that Turkish troops and "a number of mercenaries" had attacked three villages. SDF Commander Mazloum Abdi called on the guarantors of the cease-fire to "rein in the Turks."

The clashes reportedly killed Syrian and Kurdish troops. They happened just 48 hours after a Russian-Turkish agreement to push Syrian Kurdish forces nearly 20 miles from the border. They also follow the withdrawal of U.S. troops from the area and come one day after the U.S. lifted sanctions on Turkey.

The SDF, meanwhile, has accused Turkey of human rights abuses.

Turkey's Defense Ministry didn't respond to the SDF report but said its own soldiers had been wounded by the YPG militia, a component of the SDF that Turkey considers a terrorist group. Turkey says it's honoring the cease-fire but will still confront Kurdish fighters in the territory it believes to be its own.

Turkish presidential spokesman Ibrahim Kalin told CNN: "Our soldiers have always been very careful. The militia that we supported in Syria also have been careful in not attacking the civilians. When we began this operation, a lot of people, countries, officials, analysts and others have claimed that the civilians will be harmed, hundreds of thousands of people will be fleeing. The Kurdish people will be attacked. Demography will be changed. None of that happened."

He said: "The U.S. decision to withdraw less than 50 soldiers from the zone of attack was made after it was very clear to us that President [Recep Tayyip] Erdoğan made the decision to come across the border. And I was not about to put less than 50 U.S. soldiers in between a 15,000-plus man Turkish army preceded by Turkish militia and jeopardize the lives of our young service members. And oh, by the way, I'm not about to start a fight with a NATO ally."