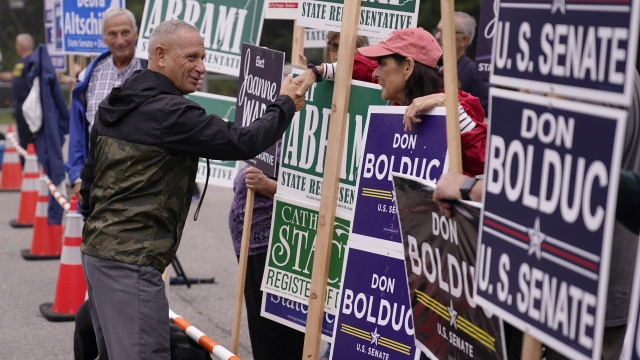 New Hampshire is getting ready to choose a candidate to challenge the state's first-term Democratic senator.

Democratic voters in New Hampshire appear to be galvanizing over the Supreme Court’s move overturning nationwide access to abortion.

"I think that women across our whole country are energized because of the overturning of Roe which we thought they would never see, so I think people realize what they can do is vote," said Heather Krans, a New Hampshire voter.

"We’ve got to get the women back their rights, I mean this is ridiculous," said George Drinkwater, who lives in Newfields, New Hampshire.

But Democrats aren’t the only party saying they are motivated to vote in November.

Democrats seem to have found a bright spot for their chances in recent months over the battle for control of the U.S. Senate.

"As Senate president in New Hampshire, I think I've proved that I can get things done. I've lowered taxes, created education freedom accounts, and we passed constitutional carry," said Morse.

"Their number one issues are inflation, energy, safety and security. All those things that Maggie Hassan has failed at, for Granite Staters and Americans," said Bolduc.

But with control of the Senate hanging in the balance, President Joe Biden’s Granite State favorability ratings hit just 22% in the latest poll — meaning Hassan may have to rely on voters looking past the president.

"The issues on the ballot are really going to drive the people out — abortion, Supreme Court, stuff like that — not that President Biden’s gonna keep em away," said Guy Cayton, an Exeter, New Hampshire resident.

But regardless of Republican nominees, the first term Democratic senator expects to have to fight for survival.

"This will be a close race, because it always is in New Hampshire. Everybody takes that responsibility very, very seriously here as voters. And I'm looking forward to making my case about my bipartisan record of results. And I will draw a sharp contrast with my opponent," said Hassan.