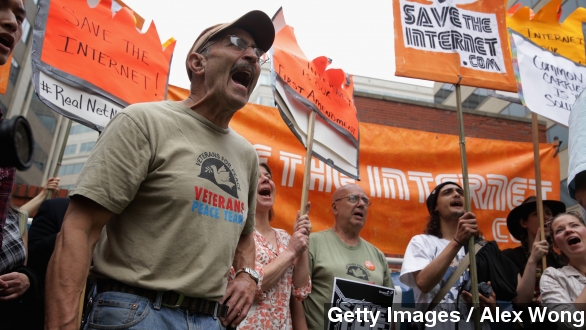 Republicans appear to be ceding the fight against Net Neutrality for now, but the FCC’s plan still faces stiff opposition.

As the debate over net neutrality enters its eleventh hour, Republicans appear to be ceding the fight. Just look at the headlines.

On Tuesday, Republican Senator and Senate Commerce Committee chairman John Thune told The New York Times: “We’re not going to get a signed bill that doesn’t have Democrats’ support. This is an issue that needs to have bipartisan support.”

But one day after The Times article came, this one from The Hill, in which Thune clarified: “Any claims that Republicans have conceded or surrendered to the Obama administration’s power grab of the Internet through FCC action is a mischaracterization of our ongoing efforts.”

Still, even if Republicans have backed off, net neutrality is hardly in the clear. ISPs have promised legal challenges to the FCC’s imminent rules. Here’s AT&T CEO Randall Stephenson:

“We cannot be good stewards of our shareholders’ capital and make these investments; and not really understand how they’re going to be regulated in three years,” Stephenson told an entrepreneurial conference in November. (Video via EY Global)

And even within the FCC there are attempted delays. Republican commissioners Ajit Pai and Michael O'Rielly want to put another 30 day hold on the vote for more public comment.

“With the future of the entire Internet at stake, it is imperative that the FCC get this right,” the letter stated. (Video via C-SPAN)

It’s worth noting the public, by and large, has signaled its support for the FCC’s proposals, in what The New York Times calls the “longest, most sustained campaign of Internet activism in history.”

The FCC will take the issue to vote Thursday morning.

This video includes images from Getty Images and music by Revolution Void / CC BY NC 3.0.