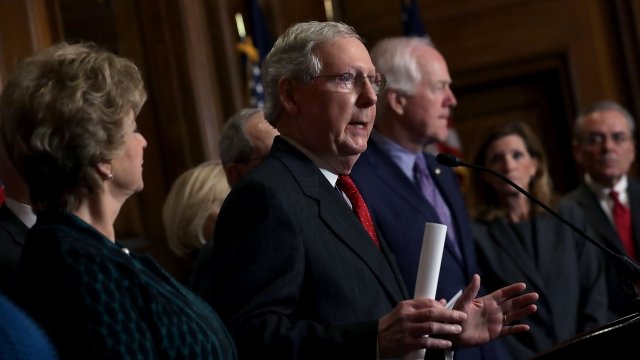 A foundational principle of the GOP tax plan is suddenly looking a little more shaky as Congress further hashes out the proposal.

Both the House and Senate passed a version of tax reform which slashed the corporate tax rate from 35 percent to 20. But now that the two bills are being reconciled, negotiators are now reportedly thinking about making that 21 or 22 percent.

Republicans Must Resolve This Big Issue Between Their Tax Bills

Members of the House and the Senate need to resolve one big issue to reconcile their versions of the tax bill — the Obamacare individual mandate.

It's a substantial difference: Each extra percentage point of corporate tax is estimated to generate about $100 billion of government revenue over 10 years. And the extra money might not be on the table without President Donald Trump.

The White House has held firm on a 20 percent corporate tax rate throughout the debate, but Trump recently suggested he'd be open to boosting that rate to 22 percent, undercutting the administration's previous position.

Republican negotiators could use the extra revenue from a rate hike to address some Congressional concerns with the bill. Also on the table are more generous deductions for places with high state and local taxes.