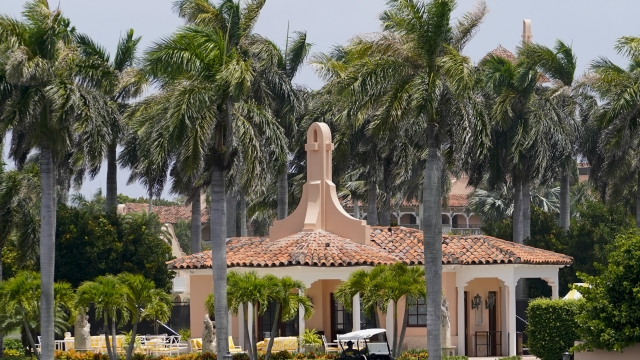 Many Republicans are expressing their outrage with the FBI's unannounced raid of Donald Trump's Florida estate.

As the FBI sifts through the evidence it seized from Donald Trump's Florida home, outrage from the former president's supporters is only beginning.

Twenty-four hours later, the scene outside of Mar-a-Lago is still crowded with people holding signs and flags in support of Trump.

Former Vice President Mike Pence tweeted he "shares the deep concern of millions of Americans over the unprecedented search."

"If they can do it to a former president, imagine what they can do to you," said Rep. Jim Jordan.

And on TV, strong words from President Trump's former lawyer, Rudy Giuliani. "I mean this is an outrage. And it's not just the FBI. It's our crooked attorney general. And if the Republicans had any gumption, they'd begin an impeachment proceeding."

Donald Trump has called the raid "dark times for our nation," claiming the search was unannounced and agents had broken into his safe. His son, Eric Trump, said nothing was taken from that safe.

The former president wasn't at Mar-a-Lago at the time of the search.

The FBI and the Justice Department have not commented yet, but sources tell The Associated Press the raid is in connection with documents, some classified, that Trump is accused of illegally taking with him from the White House.

"To have 30 FBI agents — actually, more than that — descend on Mar-a-Lago, and gave absolutely no notice. They went through the gate, start ransacking an office, ransacking a closet," said Eric Trump.

"They are terrified he's going to announce any day that he's running for president in 2024. This is a very convenient way to just throw a little more mud on Donald Trump as though they haven't already done enough," said Lara Trump, Eric Trump's wife.

The raid is connected to just one of several investigations involving Trump.

The House Committee probing the Jan. 6 riot by Trump supporters at the Capitol is scheduled to present more evidence against the former president in the coming weeks.

An Atlanta-area grand jury is hearing testimony into Trump's alleged meddling in the 2020 election in Georgia.

He's also been accused of raising $250 million for a so-called "official election defense fund" which never existed. The scheme may now be under investigation as a potential wire fraud.

And in New York, prosecutors are looking into claims Trump's family real estate company misrepresented the values of its properties to get favorable bank loans and lower taxes.