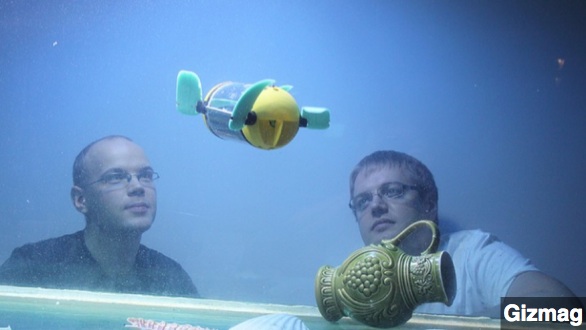 The U-CAT is designed to navigate and map out underwater wrecks more safely and cheaply than human divers could.

When in the sea, do as the sea-dwellers do. That seems to be the idea behind the newest underwater explorer from researchers at the Tallinn University of Technology.

U-CAT is modeled after sea turtles and gets around using four independently driven fins. The flippers let it swim in all directions or turn in place. (Via YouTube / mihkell)

Engadget explains using fins instead of propellers could help U-CAT stir up less of a mess on the ocean floor. Propellers can kick up silt and make it hard to get clear pictures of the environment.

The robot is the latest development from the ARROWS Project, an E.U. initiative to use autonomous robots to augment every step of underwater archaeology in the world's oceans and seas.

U-CAT will be used for mapping underwater wrecks and other sites of interest. Gizmag reports it will go through its paces in the Mediterranean and Baltic seas.

"The idea is that U-CATs could ultimately be used in conjunction with other underwater robots that are too large to enter wrecks, and too expensive to risk losing within them."

According to Tallinn's overview of the new robot, that's a job generally reserved for human divers, but it's still expensive, not to mention dangerous. "U-CAT is designed with the purpose of offering an affordable alternative to human divers."

It's not clear when U-CAT is expected to start swimming around mapping out wrecks, but it will be on display through Dec. 1 at the London Science Museum.