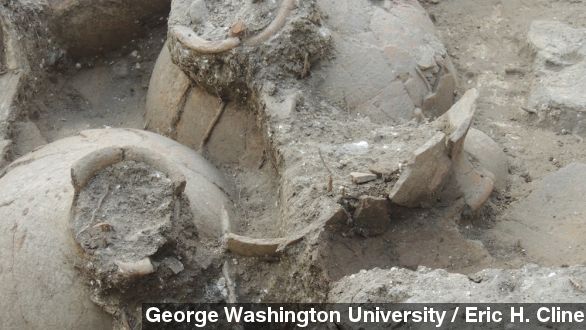 ​If you enjoy a finely aged wine, this is the story for you!

Archaeologists in northern Israel discovered a 3,700-year-old palace cellar packed with the remains of 40 large wine jars — about 3,000 bottles worth. (Via LiveScience)

The bad news: The vessels were broken, and their contents had long since vanished — so you won't be getting a taste of that sweet ancient vino. (Via The New York Times)

The good news? There were still traces of the liquid inside those jars, so researchers have an idea of how it might have tasted.

The wine was flavored with juniper, honey, mint and cinnamon bark. One researcher suggested if you took a modern-day retsina, a Greek white, then poured some cough syrup in it, you'd probably be pretty close. (Via Wikimedia Commons / Nsaa)

Mmm ... tasty? Well, apparently so, as this was most definitely "the good stuff." It likely contained several local materials​ "but also possibly materials that were imported from elsewhere such as cedar oil, thus making it a very luxurious drink that was reserved for these special occasions." (Via NBC)

The palace was found at a site called Tel Kabri, which researchers believe was first settled 16,000 years ago. The palace, which is at the center of the city, was likely destroyed around 1,600 B.C. by an earthquake or similar catastrophe. (Via Wikimedia Commons / Hanay)

Researchers found two doors leading out of the wine cellar to what appears to be other rooms. They plan to explore those in a 2015 dig.