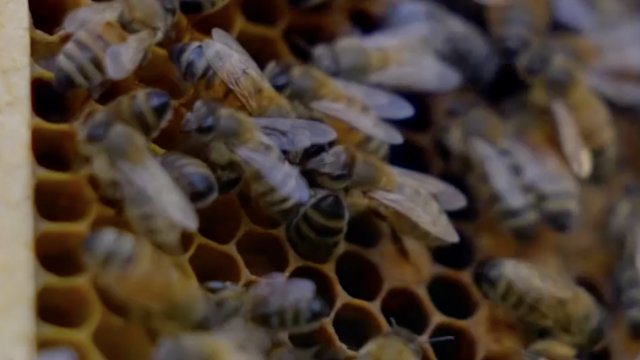 States like Wisconsin and West Virginia are experiencing changes to the job industries that have sustained them for years.

The places that raise and mold us sometimes never let go, and when we feel they're unjustly overlooked, we fight for them.

"I love these mountains," he said. "There's no other place I'd want to be"

So is beekeeper Randy Smith.

"When I was in the Navy, I couldn't wait to get back to West Virginia," Smith said. "I've been all over the world, and there's no place like West Virginia."

They know most people outside their state will likely never pass through it, but they preach for it. They fight for it even through a few buzzy boxes.

"It's just the most fascinating thing of anything I've ever fooled with," Scyphers said.

Their backyards are bee yards. Both Scyphers and Smith produce hives of local honey.

"It's amazing how the queen is so dedicated to the beehive that she'll create other queens, knowing that one of them will actually kill her, because she's more concerned with the longevity of the hive," Smith said.

In West Virginia, one queen has reigned for decades over a dying hive.

"I grew up in Coal City," Smith said. "They call it Coal City because it's made mostly of mining families. It's not in its heyday anymore."

Smith worked in the coal industry his whole adult life. Scyphers did for years until work went away.

"It's home to me, but it's just so rundown now because most of the coal mines are gone now," Scyphers said. "And it's not the people's fault. It's location and the economy, mostly that."

Across the country, communities that thrived on one industry have been forced to change. Wisconsin is losing a dairy farm a day. The Carolinas used to hold so many jobs in textiles and clothing before machines took over. In West Virginia, coal mines employ a tenth of what they used to.

"I think it's difficult for some to let go of the past and to some extent, that's all of us," he said.

NEWSY'S MATT PEARL: Does this initiative have anything directly to do with coal?

But they can't help but intersect. Their facility stands on an old summer camp for coal miners' children. Their mission — training beekeepers to produce natural honey — is a new lane in a state that needs them.

"The drawbacks to those regions are how inaccessible they are by road and the terrain they're located in, but that's what makes them so perfect for the opportunity of beekeeping," Lilly said. "With 5-7 years of experience, it'll be easy for someone to earn $20,000 to $30,000  a year — which might sound like a little bit, but if that's more than your county's average annual income, that's big."

JAMES SCYPHERS: Not at all. It's totally different.

Scyphers is retired now. So is Smith. Beekeeping, to them, is a hobby. For some, it may become a career. It will never remotely usurp the queen. Maybe that's OK.

"If we replace one piece of a large puzzle with 10 pieces that are — in my opinion — better for the communities, that's fine," Lilly said.

For so many in this state, leaving the place they love, the place that raised them, is not up for debate. The point is the fight to add to the pride they preach.

"We really don't attract the attention politically. Our numbers are so small, it really doesn't matter. So we've kind of learned, we have to take care of ourselves from within," Lilly said. "I think we need to look at what we have instead of complaining, 'Oh, we've been dealt lemons.' Like, we've got the world's best lemonade. Let's just take advantage of it."