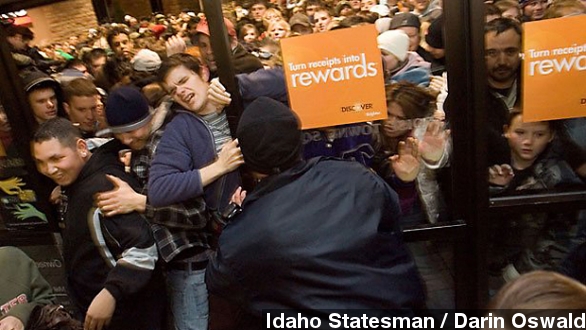 This year, some of the nation's biggest retailers are wiping their hands clean of the monster they created: Black Friday.

This year, some of the nation's biggest retailers are wiping their hands clean from the monster they created, Black Friday.

"Witnesses say a man was trampled to death." (Via MSNBC)

"Two people are shot and killed on one of the busiest shopping days of the year." (Via KABC)

We all remember the crazy Target woman, training so she could be the first in line to land the biggest deal. (Via Target)

Well, she's gone and has been replaced by this commercial, which features plenty of items for everyone — sharing, even.

This new Target ad falls in line with a new trend by advertisers to urge consumers to shop smarter rather than harder this holiday season.

"Phil, what happened to you?"

"Black Friday. It was crazy, saved hundreds. How'd you make out?"

"Well I slept in, saved thousands." (Via Buick)

Walmart seems to also be joining in, offering its Black Friday deals a week in advance and giving one-hour guarantee items. (Via CNN)

"Can't leave without the TV. Wait, what if they're all gone?"

"If we run out, you'll still get it by Christmas at Black Friday prices." (Via Walmart)

Whether this switch in Black Friday strategy will help with consumer spending or the violence remains to be seen, but according to the LA Times, retailers have to do something because they need Black Friday a lot more than you do.

"[Retailers are] trying to make up for sales that have been weak through much of the year, damaged by volatile weather, shaky consumer confidence, the government debt stalemate and a payroll tax increase. Forecasts for the Thanksgiving-to-Christmas period ... are dour."

Retailers as well as consumers will be working with a shorter holiday season. Between Thanksgiving and Christmas Day, there will be only four weekends this year instead of five.