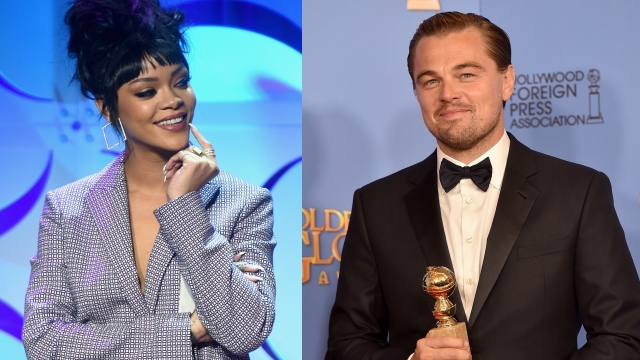 Rihanna and Leonardo DiCaprio were allegedly caught smooching at a Paris nightclub, but other outlets say they're just friends.

Rihanna and Leonardo DiCaprio could be refueling their romance.

The Sun says the couple was "caught snogging" in a Paris nightclub Sunday. An alleged witness told the outlet the two were "really going for it." There was some rumored use of tongue, too. (Video via Island Def Jam Music)

Now, their first "relationship" was never confirmed in the first place.

But People says a source of its own told them the two are just friends. And TMZ's also unnamed source confirmed that. There's apparently a photo that makes it look like they were kissing, but TMZ's peeps say it's just a bad angle. We can't show you the photo because the photo agency says Leo's party is trying to block the sale. (Video via Paramount Pictures)

Not that we're knocking an age gap. Harrison Ford is 73, and his wife, Calista Flockhart, is 51, and they're doing great! We can dream, right?