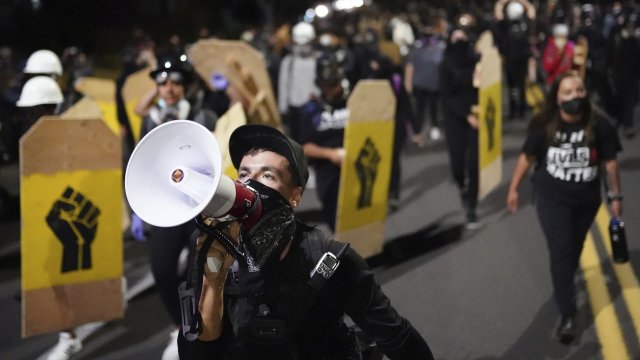 Flash bangs and smoke canisters were used against demonstrators who threw rocks, frozen eggs and fireworks at police.

Oregon authorities declared a riot in Portland Saturday night after a fire was set inside a police union building.

Police said a group of protesters broke into the building, started the blaze and were adding to it when the riot declaration was made shortly before midnight.

Three officers were hurt while trying to clear a crowd of several hundred people outside the police union building. Flash bangs and smoke cannisters were used against demonstrators who threw rocks, frozen eggs and fireworks at police.

Portland's protests had been smaller and less intense since federal agents sent by the Trump administration left the city last week. But tensions have been rising again in recent days in Portland, which has seen a surge in shootings, homicides and destruction.

Police arrested 24 people overnight Friday, including one charged with assault on an officer after overnight clashes began the weekend.

Some protesters filled pool noodles with nails and placed them in the road, damaging patrol vehicles.