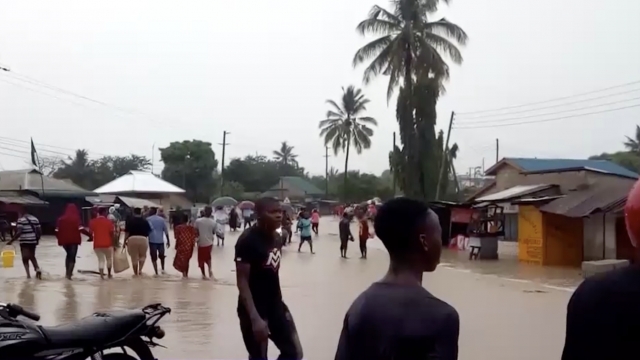 Tanzania's capital city could lose up to $5.3 billion in public and private assets because of the threat of rising sea levels and flooding.

In the 1980s, the Msimbazi River used to be a friend to Dar es Salaam resident Kikosele Abdallah. But over the last couple of decades, he feels it has turned against him.

Severe flooding due to rising sea levels has seen the Msimbazi River wash away his house and farm, amounting to losses worth more than $50,000. He's just one of the millions of residents here, many of them poor, who are living in a low-lying city surrounded by a rising sea.

Tanzania's capital city, Dar es Salaam, could lose up to $5.3 billion in public and private assets because of the threat of rising sea levels and flooding.

"The life we live now is severely affecting my family," Abdallah said. "I never thought I would live in a shack. I used to own a house, with electricity and running water, etc. But now I live with no water, no electricity. We use kerosene lamps now."

Flooding and sinking are not the only issues. Coastal erosion is another serious problem.

Amos Majule is a lecturer and climate change expert from the University of Dar es Salaam who says the intrusion of salt water is impacting the drinking water, hygiene and irrigation supplies.

"Sea level rise will be from 0.5 feet up to almost 1.5 feet. So due to this, it means the systems, natural systems, the ecosystems along the coastal areas will be affected," Majule said.

Rising sea levels are not just threatening Tanzania, but other parts of Africa. As tides grow stronger by the year, wave after wave encroaches on coastal cities and villages, decimating dwellings and farmlands.

Part of the Tanzanian government's strategy involves improving urban planning and removing and relocating coastal communities that are at risk.

"Coming with a master plan to address the problem of Dar es salaam to make sure the settlements are quite a bit far from those prone areas to floods and prone areas to all kinds of damage from climate change," said Andrew Komba, director of environment at the vice president's office.

Tanzania is also working with the UN to build extensive structures along Tanzania's coast, including over 2,400 meters of walls known as groynes and seawalls. The walls stop the shores from disintegrating and eating up roads and buildings nearby.

More protection is needed, but the issue is the high cost. For instance, building sea walls to protect vulnerable areas of the city against a one-meter rise in sea level would cost $337 million.

In 2012, Tanzania produced a National Climate Change Strategy in response to growing concerns that changes to the environment were happening more rapidly than anyone had predicted.

At its core, adaptation and mitigation policies are meant to help fight rising sea levels.

"So it affects economics, it affects the social and cultural – even the way people live," Komba said. "If you don't properly handle the environment, it means that the changes that are being counted as the climate changes will impact you negatively and you will realize those kinds of impacts in a more harmful way."

And Tanzania realizes it cannot fight the fight alone and is calling on other countries in the region to come together to take action before it's too late.