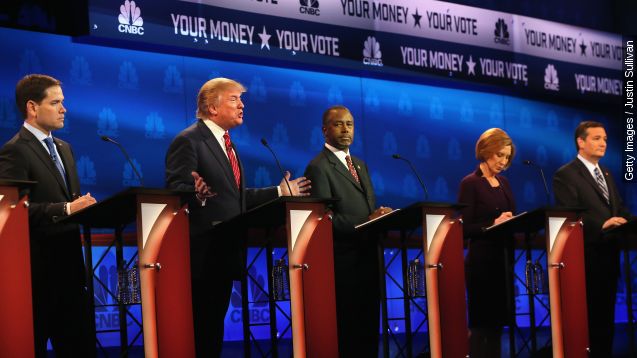 "Does that not speak to your vetting process or judgment in any way?" host Carl Quintanilla asked candidate Ben Carson, eliciting boos from the crowd.

In a letter to NBC, Priebus wrote that CNBC's "handling of the debate was conducted in bad faith. ... Moderators engaged in a series of 'gotcha' questions, petty and mean-spirited in tone, and designed to embarrass our candidates."

The CNBC moderators' pointed, confrontational questioning drew plenty of criticism from Republicans, Priebus chief among them.

He said on Fox News, "We had assurances that it would be straight-up finance, which is what they do every day, and what was delivered was nothing but a crap sandwich."

"I don't think the RNC could run a one-car funeral," senator and presidential hopeful Lindsey Graham told MSNBC. "This is getting pretty bad."

But the RNC has also come under fire for its handling of the debates — a Politico report claims several GOP presidential campaigns are considering cutting the committee out of the debate process.

The RNC's letter explicitly cancels the NBC/Telemundo debate scheduled for Feb. 26, though Priebus says the party will still hold a debate on that date.