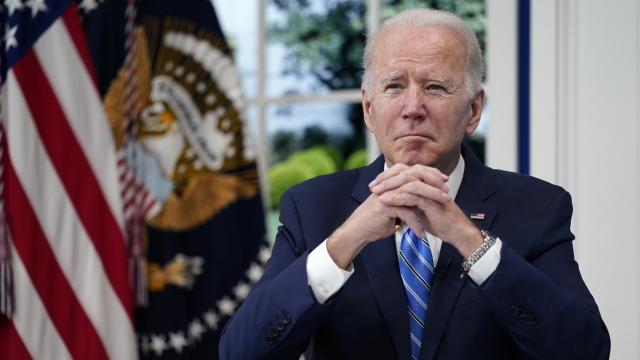 Experts say President Biden's mistake was focusing too much on vaccines and not enough on testing.

"This year, the Fourth of July is a day of special celebration, for we are emerging from the darkness of years; a year of pandemic and isolation; a year of pain, fear, and heartbreaking loss," he said.

But as the year comes to a close, the end of the pandemic feels just as far off as ever.

Peter Pitts is the co-founder of the Center for Medicine in the Public Interest.

He said: "Unfortunately, I think the Biden administration unfurled the mission accomplished banner a little prematurely."

The U.S. saw the biggest spike yet in new cases, deaths and hospitalizations from the Delta variant.

Now, the Omicron variant is on track to outpace that surge in cases and has prompted a return of mask requirements, travel restrictions and a shortage of testing.

Experts say President Biden's mistake was focusing too much on vaccines and not enough on testing.

"President Biden stopped using the bully pulpit to talk about COVID to convince people to do the right thing," Pitts said. "In fact, any communications that did come out of the White House were aggressive and pointing the fingers at people who were being held to be irresponsible. And I don't think that is a good way to change people's mind."

President Biden admitted in a virtual meeting with governors that his administration should have acted sooner on testing.

"We went from no over the counter tests in January to 46 million in October, 100 million in November and almost 200 million in December," he said. "But it's not enough. It's clearly not enough. If I had, we had, known we would have gotten harder quicker if we could have."

But the White House also marked some major milestones in the fight against COVID this year, including approval of new rapid tests, new treatments for COVID like moniclonal antibodies and even pills that can prevent severe illness.

And now more than 200 million American adults, teens and children are vaccinated.

"That is amazing," Pitts said. "And the result is that people aren't dying. More people are getting infected, but fewer people are suffering serious manifestations, being hospitalized and dying from COVID. That's enormously important."

Will we ever defeat COVID? Experts say it's likely the pandemic will become an endemic like the flu, and that President Biden should be conveying that to Americans.

"I think President Biden can inform Americans that an endemic means that COVID is going to be around with us for quite a while, just like the flu is every year," Pitts said. "And the common cold. We have to take the appropriate precautions."