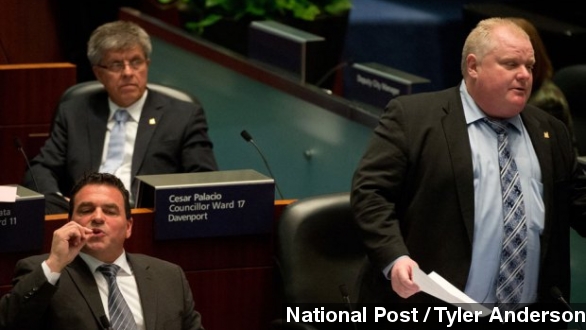 The Toronto City Council voted Wednesday to request Mayor Rob Ford's resignation, but he says he will not leave office.

Embattled Toronto Mayor Rob Ford stood before the City Council and a packed house Wednesday in an effort to defend his most recent indiscretions.

​FORD: "You're absolutely right. I've made mistakes, personal mistakes. … I understand the embarrassment that I have caused every resident in the city. I'm humiliated by it, but I cannot change the past." (Via NBC)

But things got ugly really fast. Ford was asked about this photo, which was taken in front of what police claim is a crack house. (Via Toronto Star)

FORD: "Have you walked in the house? No, you haven't. So you're listening to what the media says?"

​COUNCILOR MICHAEL THOMPSON: "I have no interest in being in that house. I am not a crack user." (Via CBC)

And outside the City Hall were hundreds of protesters demanding Ford's resignation.

"He's proven himself to be corrupt." (Via CTV)