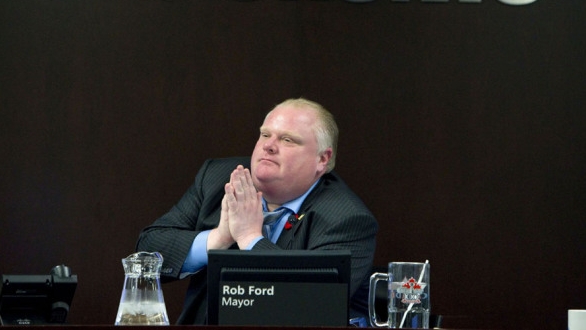 Toronto’s City Council will vote Monday to strip its embattled mayor of what little power he has left.

You could call it Rob Ford’s day of reckoning. Toronto’s City Council will vote Monday to strip its embattled mayor of what little power he has left.

"If the councillors want to strip all my powers, that's up to them." (Via Fox News)

The council will vote to move Ford’s office and budget to the control of Toronto’s deputy mayor — making Ford basically just a figurehead. For his part, Ford has vowed to take the City Council to court. (Via City News)

On Friday, the council voted overwhelmingly to strip him of his powers of appointment and emergency rule. This following confessions the mayor of North America’s fourth largest city bought and used crack cocaine while in office. (Via The Globe and Mail)

“Have you done illegal drugs?”

South of the border, Ford remains an irresistible target.

But unlike in the U.S., the City Council has no mechanism to remove an elected official unless that person is convicted of a felony and imprisoned. That leaves the door wide open for Ford to even set his sights on a higher office.

"One day, I do want to run for Prime Minister.”

But that’s not all. Ford is taking his talents to primetime— with a new talk show debuting on Canadian TV Monday night. But then, Ford’s no stranger to on-camera work. (Via CNN)