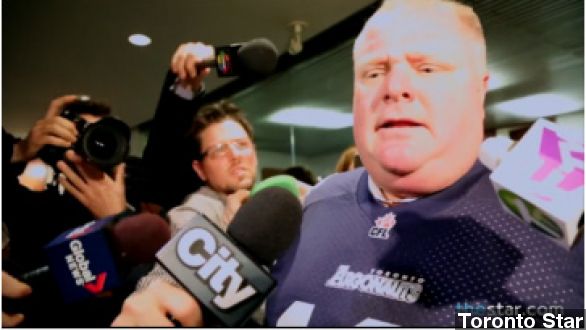 The Rob Ford saga continues. Just one day after this:

COUNCILOR DENZIL MINNAN-WONG: "Have you purchased illegal drugs in the last two years?"

There was this regarding allegations he offered to perform oral sex on a co-worker.

FORD: "I've never said that in my life to her. I would never do that. I'm happily married; I've got more than enough to eat at home." (Via Toronto Star, CBC)

The allegations that Ford solicited a co-worker come from 500 pages of newly released police reports.

"Among the accusations, Ford guzzled vodka and then drove his car, he had a woman who appeared to be a prostitute visit his office, and he made lewd suggestions to one of the women on his staff." (Via CNN)

While wearing a football jersey, Ford told reporters outside his office he will now take legal action against the co-workers making the accusations.

FORD: "It's unfortunate that I have to take legal action. I don't appreciate people calling Alana a prostitute. … This is very disturbing against my wife." (Via BBC)

Oh, and Ford is still adamant about staying in office — something the city council has no authority to change. Ford said he's seeking help from health care professionals, but he wouldn't elaborate.