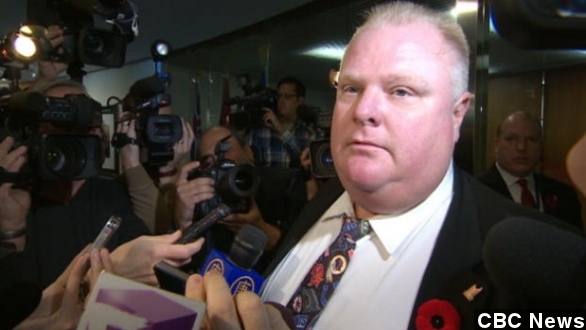 How’s this for an answer?

TORONTO MAYOR ROB FORD: “Yes, I have smoked crack cocaine. (FLASH) Have I tried it? Probably — in one of my drunken stupors, probably approximately about a year ago.” (Via CBC)

That was Toronto Mayor Rob Ford, who, for the last few months, has faced questions about whether he smoked crack. So Tuesday — an admission.

The Toronto Star reported back in May that its reporters had seen the mayor in a video inhaling from what appeared to be a glass crack pipe.

His denial was pretty vehement at the time.

So what's with the about-face? Tuesday, he blamed reporters.

"You ask a question properly, and I'll answer it. ... I wasn't lying. You didn't ask the correct questions."

So, putting the blame on reporters. That's the problem. The alleged video showing him doing it still hasn't been made public.

But Tuesday after his admission he again called on Toronto police to release it, saying he doesn't remember ever being recorded on video.

And while Ford earlier this week rejected calls to resign, he did issue an apology. Remember though, this is before​ he admitted to smoking crack.

FORD: “Friends, I’m the first one to admit I’m not perfect. … (FLASH) I have made mistakes, and all I can do right now is apologize for mistakes.” (Via CBS)

Tuesday Ford once again rejected calls to resign or take a leave of absence.