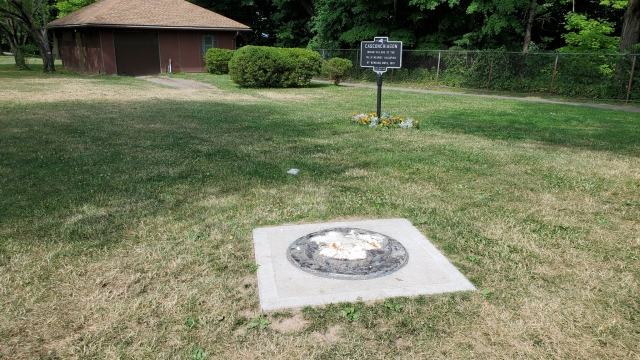 July 5 marked the anniversary of Douglass' now famous speech, "What to the Slave is the Fourth of July?"

A statue of Frederick Douglass was vandalized and ripped from its base on Sunday, the 168th anniversary of one of his most famous speeches.

Here's what's left of the monument in Rochester, New York. The statue once stood in Maplewood Park along the route of the Underground Railroad, where Douglass and Harriet Tubman, among many others, helped slaves escape to freedom.

On July 5, 1852 Douglass gave a now-famous speech titled "What to the Slave is the Fourth of July?" to the Rochester Ladies' Anti-Slavery Sewing Society. The abolitionist and former slave criticized the celebration of Independence Day in a nation that allowed the enslavement and oppression of Black people.

In part, he said: "This Fourth [of] July is yours, not mine. You may rejoice, I must mourn." He added that, to a slave, Independence Day is "a day that reveals to him, more than all other days in the year, the gross injustice and cruelty to which he is the constant victim."

Police say the statue was found about 50 feet away from its base, near the gorge of the Gennessee River. Carvin Eison, a director of the project that brought the statue to the park, told the Rochester Democrat & Chronicle it's too damaged to be fixed, but that it will be replaced. He also questioned whether the destruction may be related to the recent vandalism and destruction of Confederate monuments.