Roe Is Overturned. What's Next? 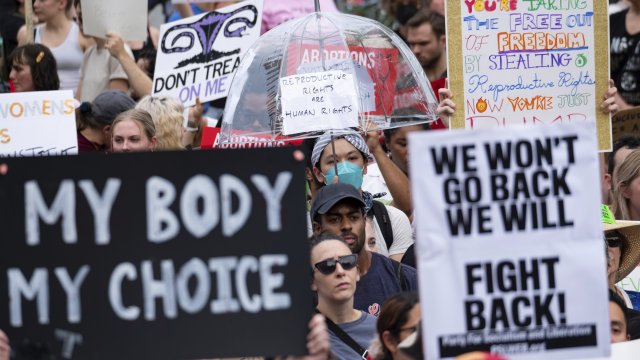 The Supreme Court overturned Roe v. Wade after nearly 50 years, ending the federal right to abortion in the U.S. Now, states can decide what access to abortion will look like.

The case that triggered this decision was Dobbs v. Jackson Women’s Health Organization. It was related to a Mississippi law that banned almost all abortions after 15 weeks. It was considered the most serious threat to abortion rights since Planned Parenthood v. Casey in 1992, but in that case, the Supreme Court reaffirmed Roe.

While this outcome isn’t totally surprising — considering the draft decision that was leaked in early May — there are still a lot of unknowns about what’s to come. But, let’s look at what we do know:

Almost half of states are expected to quickly outlaw abortion or heavily restrict it. Thirteen states have trigger laws — meaning abortion would be banned within 30 days from the date Roe was overturned. Bans in three of those states — Kentucky, Louisiana and South Dakota — were set to take effect immediately.

In other trigger law states, the attorney general, governor or legislature has to confirm that the Supreme Court’s opinion does in fact overturn Roe, and then the new laws are put in place.

Missouri Attorney General Eric Schmitt wasted no time in doing just that. He said in a statement that his office has “effectively ended abortion in Missouri, becoming the first state in the country to do so following the Court’s ruling.”

These states have different exceptions to their bans: They all allow abortions to save the life of a pregnant person, but only five allow it in cases of rape or incest.

Several states, including Tennessee and Kentucky, would make it a felony for doctors to perform abortions.

There are also a few states with abortion bans from before Roe, which were found to be unconstitutional. Proponents say it may be possible to now reinstate these.

For example, Alabama’s pre-Roe law banned all abortions unless necessary to save the life of the pregnant person. Wisconsin has a similar law that has not been blocked by courts, though the state’s Democratic Attorney General said he won’t enforce it.

A handful of other states have post-Roe abortion restrictions that have been blocked by the courts, at least temporarily. States like Arizona and Michigan still currently allow abortions up to the point when a fetus could survive outside the womb, also known as viability. But those states have pending laws that could cut off legal abortion at six weeks, or altogether, except to save the life of the pregnant person.

And finally, there are still nearly 30 states where abortion protections are either enshrined in state law or otherwise not yet restricted, and in at least over a dozen of those states, that’s not expected to change soon.

Experts say state-by-state legal battles will be playing out over the next few weeks, or even months.

But outside the courtrooms, the legislative votes, and the policy debates on Capitol Hill, it's important to remember what this decision will mean for pregnant people and families whose lives may be changed after today.

This already played out in Texas, after the country’s most restrictive abortion law went into effect earlier this year. Under SB8, Texas does not allow abortions past six weeks of pregnancy — before most people even realize that they're pregnant. That law goes further in empowering private citizens to sue anyone who “aids or abets” an abortion. There was an immediate chilling effect on abortions in the state, and the law succeeded in causing the number of in-state abortions to plummet.

According to abortion rights advocacy organization the Guttmacher Institute, once all trigger laws take effect, some people seeking abortions will have to drive over 600 miles to reach the nearest clinic. International sales of abortion-inducing drugs have increased this year in anticipation of the ruling, from abortion pills sold in border towns to pills shipped to all 50 states from advocacy groups like Aid Access.

One thing is clear: A historic shift has happened. The landscape for abortion laws and rights in the U.S. has dramatically changed, and the impacts will be felt across the country, in many parts of our lives, as the legal battles in each state continue to unfold.