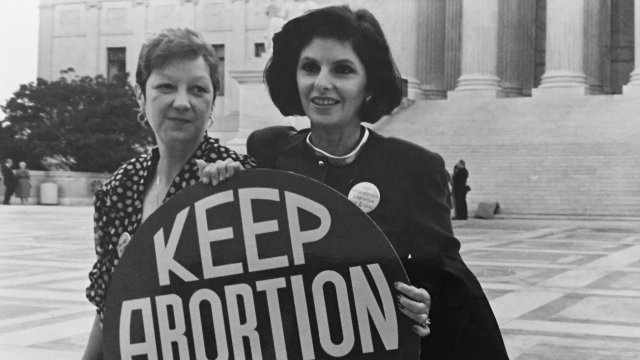 The decision effectively legalized abortion across the country.

Most Supreme Court decisions are granular, little-noticed interpretations of the law.

But a few are landmarks. Roe v. Wade was a landmark. It effectively legalized abortion across the United States.

Here are the facts and the players in the case. "Jane Roe" was actually Norma McCorvey. She was a Texan in her early 20s who wanted to terminate an unwanted pregnancy in 1969. Abortion was legal in Texas at the time — but only for the purpose of saving a woman's life. That was not the issue for McCorvey; her life was not at risk.

She tried unsuccessfully to get an illegal abortion, and was referred to two attorneys interested in challenging anti-abortion laws. The "Wade" in Roe v. Wade was Henry Wade, the district attorney of Dallas County, who enforced the Texas abortion law. McCorvey soon filed a case against him.

You can probably expect to hear a lot about Kavanaugh's thoughts on abortion in the coming weeks.

The Supreme Court agreed in 1971 to hear the case, and on Jan. 22, 1973, struck down the Texas law in a 7-2 decision. Justice Harry Blackmun wrote the majority opinion and declared that a woman's right to privacy under the 14th Amendment superseded a state's right to ban abortion.

The court set different rules for each trimester. In the first trimester, the choice to end pregnancy was entirely up to the mother. In the second trimester, the government could regulate but not ban abortion, in order to protect the mother's health.

In the third trimester, the state could prohibit abortion to protect a fetus that could survive outside the womb, except when the mother's health is in danger. Justices Byron White and William Rehnquist dissented. They basically held that the argument of privacy went far beyond the intentions of the framers — an argument that could signal the grounds for a challenge to Roe.

White and Rehnquist also stated that the court's decision did not stick to the specific facts of the case because "Roe" was not in her first trimester at the time of the litigation. Public opinion was quickly shifting. In August 1972, Americans opposed legalized abortion 46-42, but by April 1973 it was 52-41 in favor.

In the years since, Roe has been modified but not overturned. A notable example was a 1992 case, Planned Parenthood v. Casey. For all intents and purposes, this is the new standard by which abortion cases are judged.

The focus this time wasn't privacy, it was roadblocks which had been intentionally set up to make it harder to get an abortion. In a 5-4 ruling, the court said restrictions are "unconstitutional" if they place an "undue burden" on a woman.

Support for Roe v. Wade remains strong. A Kaiser Family Foundation poll in June 2018 found that 67 percent of Americans do not want the Supreme Court to overturn the ruling while 29 percent do. The question now, of course, is what will the Supreme Court do with a solid conservative majority?