Rogen And Franco Make Light Of Sony Hack On 'SNL' 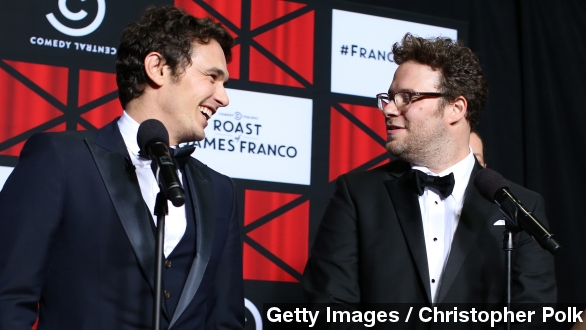 Multiple reports say North Korea is being looked at as possibly executing the attack in response to the release of Seth Rogen and James Franco’s new movie, “The Interview,” which depicts an assassination attempt on North Korean leader Kim Jong Un.

"You’re not going to believe this but an hour ago they released some of our private photos from our phones." Rogen said. "They leaked this one of me teaching you how to read."

Franco hosted Saturday Night Live this week, and Rogen joined him during the opening monologue and tried to make light of the ongoing situation.

Sony Entertainment’s CEO Michael Lynton said Saturday the attack was unprecedented and could not have been prevented. “The bottom line is that this was an unparalleled and well planned crime, carried out by an organized group.”

The autopsy of the attack is ongoing, but data-security firm Identity Finder LLC says personal data, including salaries, home addresses, and social security numbers from people who worked for Sony Pictures Entertainment as far back as the year 2000 have been compromised.

The FBI released a warning to U.S. businesses, detailing potential methods of prevention last week but did not mention Sony by name.

And though the cyber attack was harmful, Sony’s probably not complaining about all the attention the film has received.

The Interview is scheduled to hit theaters Christmas Day.