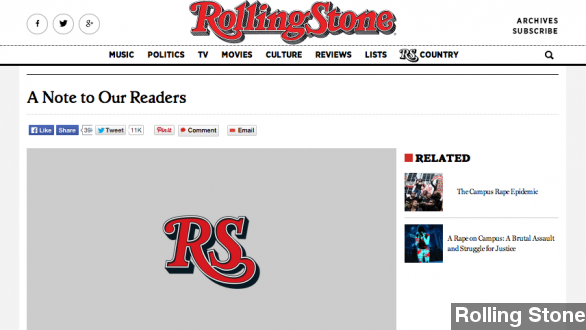 After publishing an article that shook up the nation — Rolling Stone has now apologized for the story claiming it had too many holes in it.

Rolling Stone issued an apology Friday for a story that made national headlines. It was a gripping account of an alleged gang rape at the hands of Phi Kappa Psi fraternity members on the University of Virginia campus, but according to the outlet, the victim's story had too many holes in it.

Will Dana, Rolling Stone's managing editor, published the apology Friday. It reads, in part: "In the face of new information, there now appear to be discrepancies in Jackie's account, and we have come to the conclusion that our trust in her was misplaced."

Jackie is the name of the alleged victim in the story written by Rolling Stone journalist Sabrina Rubin Erdely.

UVA student protester Catlin Peterson said, "We want and expect change in how victims of sexual assault are treated by administrators at the University of Virginia."

The backlash from the extensive piece was swift and severe. The University of Virginia asked the Charlottesville police to investigate the incident detailed in the article, the university vowed to implement new initiatives to help deal with sexual assault on campus and Greek activities were suspended for the remainder of the year. (Video via University of Virginia)

But while many were outraged and disgusted by the accusations in the article, others questioned the authenticity of the article and whether it was journalistically sound to publish an entire piece without getting a comment — or at least reaching out — to the alleged perpetrators.

Dana responded to those concerns saying, "We were trying to be sensitive to the unfair shame and humiliation many women feel after a sexual assault and now regret the decision to not contact the alleged assaulters to get their account."

He also tweeted that Rolling Stone "should have ... worked harder to convince her that the truth would have been better served by getting the other side of the story" and stressed that "That failure is on us — not on her."

Rolling Stone didn't outline the discrepancies in the article, but Phi Kappa Psi released a statement describing which parts of the article it says are untrue.

The University of Virginia chapter released a statement Friday saying no member of the fraternity matches the description given in the piece, the fraternity did not host a party on Sept. 28 — the day the alleged incident took place — and no one in the fraternity was employed at the aquatic fitness center, which was also mentioned in the article.

And now with Rolling Stone and Erdely taking heat, Mother Jones cautions against letting this new development distract from the issue. The outlet points out several disturbing statistics: 1 in every 5 women experiences sexual assault while in college, 1 in 4 of those women says the abuser was a fraternity member and only 1 percent of those abusers are ever disciplined in any official capacity.

Despite the retraction, the Charlottesville Police Department's investigation is still ongoing.