Ronda Rousey Has A Fighting Chance In Her Big-Screen Memoir 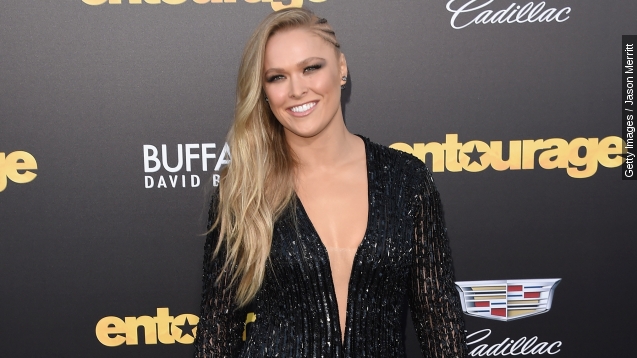 Fresh off defending her bantamweight title, Ronda Rousey scored a lead role in a movie ... based on her recent autobiography.

After winning the Women's Bantamweight Championship, Ronda Rousey is on top of the world and her game.

But Rousey has set herself apart from other athletes because she manages her athletic career while growing her acting credits.

Case in point, not even 48 hours after her 34-second knockout in Brazil, Rousey has secured her next acting role: playing herself. "My Fight/Your Fight" will be adapted from Rousey's recent autobiography.

And while it wouldn't be too unusual for a biographical movie to release while she's still alive, it’s definitely unusual for Rousey to play herself.

This film will be her latest — and first genuinely serious — role on the big screen.

So, she's got two very different, equally demanding careers. What's a girl to do?

She told the Los Angeles Daily News that the two careers balance each other out: "I think being able to balance the two will enable me to ... do both even longer."

Like her high aspirations in the world of UFC, Rousey has a lofty goal to achieve in Hollywood as well. She told CNBC, "I want to be the first chick that's ... still able to do a fight scene and a car chase and a high jump all in one long shot, with no stunt people."

Although she wants to kick butt in film as much as she does in the Octagon, she knows her athletic career got her to the level of celebrity she's at today. She told Rolling Stone: "I'm first and foremost a fighter. ... There are better actresses out there, but there are no better fighters out there."