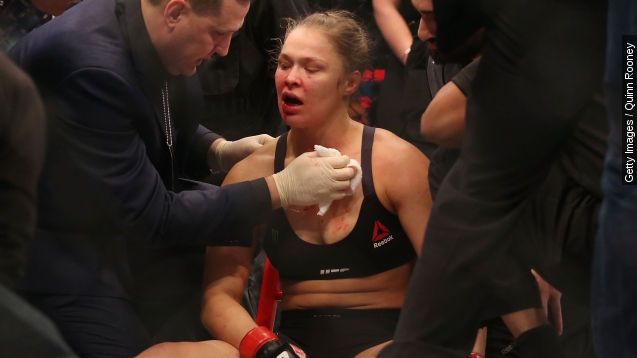 Holm is the new women's bantamweight champion after a left kick knocked out Rousey in the second round of UFC 193.

In one of the biggest upsets in recent MMA memory, Holly Holm defeated Ronda Rousey in UFC 193 to become the new women's bantamweight champion.

Rousey came out swinging early, but Holm appeared to connect with the most damaging blows. Rousey's nose started bleeding after a series of punches from Holm and things never seemed to improve for Rousey after that.

"She went out there with game plan A which has been extremely successful for her. She's ran through everybody. All of a sudden, halfway through that first round, game plan A wasn't working. ... She had an opponent that had an answer for her. She never made an adjustment," former UFC heavywight champion Frank Mir explains.

"I cannot put it into words, but all I know inside I'm thinking there's still a lot to come. ... This is one more fight and there's so much more to prove," Holm told ESPN.

Both fighters were undefeated heading into the matchup, but Rousey was the massive favorite due to her ability to completely overpower opponents. Just one of Rousey's previous 12 opponents had made it past the first round. (Video via Budweiser)

Holm is also clearly a very talented fighter, but has never displayed the level of domination Rousey has. Holm is a former boxer and her ground game seemed to be the biggest question mark heading into the match. (Video via Ready Every Second)

The matchup didn't earn Rousey any sportsmanship points either. After getting tangled up with Holm during weigh-ins, Rousey refused to touch gloves prior to Saturday's fight. (Video via MMAWeekly.com)

Rousey was taken to the hospital directly after the match but UFC president Dana White says she didn't suffer any serious injuries.