Ronda Rousey On Holly Holm Fight: 'I Need To Come Back' 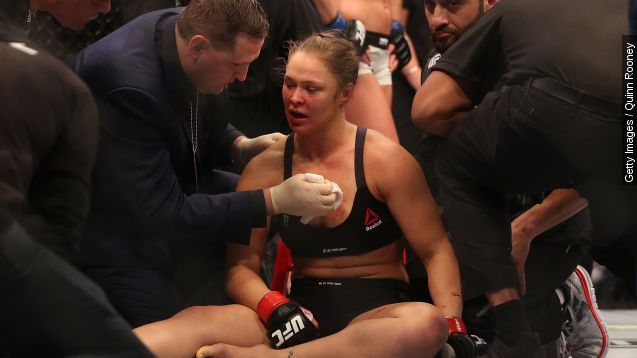 In November, Holly Holm knocked out Ronda Rousey in one of the biggest upsets in UFC history. And now Rousey is hungry for a rematch.

UFC fighter Ronda Rousey is opening up for the first time since her Nov. 14 loss to Holly Holm. She says she's sad and still recovering — but wants a rematch.

She exclusively told ESPN The Magazine: "It might be three to six months before I can eat an apple, let alone take an impact. ... I need to come back. I need to beat this chick."

Holm knocked out Rousey in the second round of UFC 193 in what's considered to be one of the biggest upsets in UFC history.

"I saw her standing back up. It was kind of a slow-motion moment right there," Holm told Seth Meyers.

Rousey, on the other hand, has largely shied away from the public eye.

The first time she was in spotted public after the fight, it made international headlines.

"Lorenzo [Fertitta] should lose our promoter licenses and never be allowed to promote another fight again if we don't make this rematch," UFC President Dana White told ESPN.

UFC President Dana White says a rematch is going to happen, and both Holm and Rousey have said they're interested in one as well. (Video via MMA Weekly)

As of now, though, there's no date set.